The Iran Deal Whip Count: How Will Lawmakers Vote on the Accord? 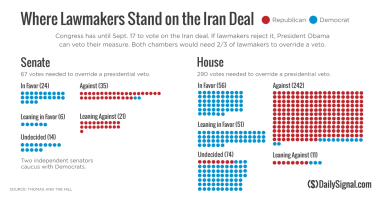 Senate Majority Leader Mitch McConnell said this week President Barack Obama has “a great likelihood of success” in overcoming congressional opposition to his historic Iran nuclear deal. But as a growing number of Democrats have announced their opposition to the deal, Republicans are holding out hope to override a presidential veto.

Republicans in both the House and Senate are expected to uniformly reject the Iran deal when they vote in mid-September. But the GOP is also working to secure votes from Democrats to oppose the agreement and override an anticipated presidential veto.

So far, all 54 Senate Republicans are expected to support a resolution disapproving of the deal, and two top Senate Democrats have vowed to oppose the agreement.

Obama said he will veto any resolution of disapproval that would halt the deal’s implementation. To override that veto, 67 senators need to oppose the deal. McConnell’s comment underscores the uphill battle GOP lawmakers face in securing a veto-proof majority.

Democratic Sen. Bob Menendez of New Jersey broke from the majority of his party Tuesday, outlining his opposition to the deal and pledging to join his Republican colleagues to override a veto.

“The agreement that has been reached failed to achieve the one thing it set out to achieve: It failed to stop Iran from becoming a nuclear weapons state at a time of its choosing,” Menendez said during a speech at Seton Hall University.

The former chairman of the Senate Foreign Relations Committee is the second Democratic senator to reject the deal, joining Sen. Chuck Schumer of New York, an influential Jewish liberal, in opposition.

With Menendez’s and Schumer’s opposition to the deal, Republicans currently have 56 of the 60 votes needed to advance a resolution of disapproval.

Dan Holler, communications director for Heritage Action for America, said it is “quite likely” the four Democrats needed to pass the resolution will join Republicans to oppose the deal.

“In many ways, it is a free vote for some Democrats to create a little bit of distance between President Obama and Hillary Clinton,” Holler said. “The bigger question, though, is whether Chuck Schumer, who is poised to be the next Democrat leader, can bring along enough votes to override the president’s veto.”

Menendez’s announcement came as Obama has been lobbying from his Martha’s Vineyard vacation home to pull together the 34 Democrats needed to prevent Congress from overriding a veto. Twenty-four have announced their backing, while another six are leaning toward supporting the deal.

Republicans need 13 Democrats in the Senate to join them in opposition to reach the two-thirds needed to override the president’s veto.

In the House, Obama needs 146 Democrats to sustain a veto. Fifty-six have announced support for the Iran deal, while another 51 are leaning toward a “yes” vote. Twelve oppose the deal, but Republicans need another 43 to override a veto.

Obama is relying on Democrats after the administration’s attempt to convince key Republicans to support the deal was dealt a blow last week. Sen. Jeff Flake, R-Ariz., who spoke with the White House about the agreement, announced Saturday he would oppose the accord. Sen. Bob Corker, R-Tenn., followed suit Tuesday.

The Daily Signal compiled the Senate whip count using a list compiled by The Hill and the legislative database THOMAS. The House whip count uses The Hill’s list, along with public statements from House members.

The Democrats who signed onto a letter sent to the White House in May supporting the interim agreement with Iran and further diplomatic negotiations are listed under “leaning in favor” unless they have since released a statement indicating otherwise.

The 218 Republicans who are cosponsoring Rep. Peter Roskam’s resolution of disapproval are listed under “against,” along with 12 other GOP members who have released concrete statements of disapproval.

Those who have not yet released a statement or a position on the Iran nuclear agreement are listed under “undecided.”