Lessons From a True American 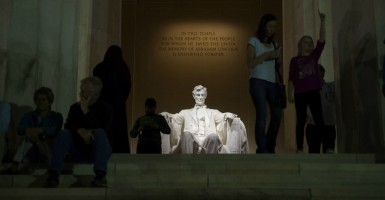 In Lincoln’s words, the “electric cord that links the hearts of patriotic and liberty-loving men together” (Photo: KEVIN DIETSCH/UPI/Newscom)

Peter W. Schramm dedicated his life to making Americans out of the people who happened to live in a place called America.

He was an immigrant, whose family escaped communist Hungary in 1956.

In an autobiographical essay, Schramm describes a conversation he had with his father shortly before his family packed up what little they had and fled the country in secret.

He asked his father why he was taking the family to America. His father replied, “Because son, we were born Americans, but in the wrong place.”

This past Sunday, Schramm, a patriot, citizen and, most importantly, a good man, passed away. He was 68.

Until recently, he served as the Executive Director of the Ashbrook Center at Ashland University in Ohio. There Schramm taught students the meaning and significance of the Constitution and the principles of the Declaration of Independence. And, even more importantly, he taught what it means to be a good human being and citizen.

For his life’s work, he won the Salvatori Prize for Citizenship in 2006.

Born American, But in the Wrong Place

We often learn the most about our country from those who are foreign born, as the examples of Alexis de Tocqueville and Aleksandr Solzhenitsyn show. Peter Schramm provided yet another example of how true that is.

One of his guides on the journey to discover the meaning of America was Abraham Lincoln, who was one of his great teachers in life.

In Lincoln’s words, the “electric cord that links the hearts of patriotic and liberty-loving men together” was “the father of all principle moral principle”—the proposition that “all men are created equal.”

Following Lincoln’s lessons, Schramm discovered that the principle of equality is a stumbling block to the harbingers of tyranny, because a government that violates the natural rights of its citizens is no government at all. For a government to be just, it must be founded upon the consent of the governed.

Since America is founded on the recognition of the natural rights of all mankind, anyone has the potential to be an American. Though Schramm could not trace his connection to America through blood, he could be an American all the same. In no other country is this possible.

But Schramm’s conception of the American mind also means that Americans are made, not simply born. One has to be taught the principles and the corresponding habits of character necessary for republican self-government.

What Schramm Meant to Me As a former student of Schramm’s, I can attest that though the process of becoming a good citizen and person is a great challenge, it is an adventure that is very much worth the effort.

Prior to being admitted into the Ashbrook Scholar Program, a rigorous academic program for Political Science and History undergraduates, Schramm interviewed each candidate to see if they possessed a mind worthy of its subject.

I will never forget meeting him for the first time—I had never before met anyone with the verve and passion for life that he possessed. His outward gregarious manner was a manifestation of the American soul—it was rugged but knew of the duties required of the citizen and human being.

He shocked me out of an 18 year slumber—an intellectual Saul on the Road to Damascus moment—and made me realize what I did not know, not what I thought I knew. The drive for increasing my knowledge about our country and, more importantly, becoming a better human being and citizen has never left me since.

Though we have lost a true patriot and a great friend, we have gained a fine example that can teach future generations what it means to be an American.