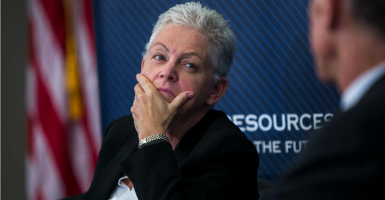 The chief environmental regulator in the United States had some blunt words of reality regarding the administration’s climate change regulations.

When speaking about the higher energy prices caused by the administration’s climate regulations on power plants, Environmental Protection Agency Administrator Gina McCarthy said, “We know that low-income minority communities would be hardest hit.”

In fact, as part of the regulation the EPA “prioritizes early investment in energy efficiency projects in low-income communities by the Federal government awarding these projects double the number of credits in 2020 and 2021.”

Low and fixed income families will be hardest hit by the administration’s regulations and energy efficiency programs will not save them. While the median family spends about 5 cents out of every dollar on energy costs, low-income families spend about 20 cents of every dollar. And the economic pain from the regulations will not be simply the direct costs of higher energy prices, but through higher prices for all the goods we purchase as energy is a necessary component to manufacture those goods.

Furthermore, federal and state programs already exist to promote energy savings for low-income families. Through the Department of Energy’s annual budget, taxpayers fund a weatherization assistance program to make efficiency upgrades in homes and many state programs exist doing the same. However, many of these programs over-promise and under-deliver on energy savings.

Another problem is that consumers are different. Given the wide variety of consumers’ income levels, access to credit and energy usage patterns, some consumers would not benefit from paying a higher price for the most energy-efficient furnace. According to the DOE’s analysis, one in five consumers would be worse off as a result of the standard. This ratio is even higher for low-income consumers.

In fact, it could be a big loss. Poorer families tend to have very low savings, if any at all.

For many, their priorities are putting food on the table and making sure the bills are paid from month to month. They may prefer cheaper appliances and light bulbs as opposed to mandated pricier ones (studies show that they do).

Forcing low income families to pay higher upfront costs for a washing machine for dubious savings isn’t desirable if the government is taking money and choices away from more pressing needs that are in the families’ self-interest.

States could also choose very well not to implement energy efficiency mandates, but instead put in place a carbon tax, a cap-and-trade program, force pricier renewable energy mandates on families and businesses.

A few weeks ago President Obama blasted critics of his Clean Power Plan saying, “Even more cynical, we’ve got critics of this plan who are actually claiming that this will harm minority and low-income communities — even though climate change hurts those Americans the most, who are the most vulnerable.”

But this plan will hurt minority and low-income families the most, as admitted by McCarthy.

And energy efficiency handouts and mandates are certainly not going to be a panacea for the federal government’s energy-raising, job-crushing climate regulations.