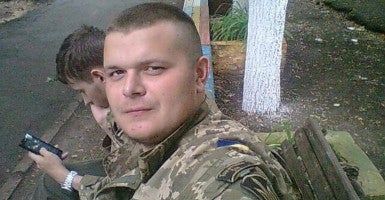 Daniel Kasyanenko said he had joined the military to defend his country from what he considered to be a Russian invasion. (Photo: Nolan Peterson/The Daily Signal.)

MARIUPOL, Ukraine—A mortar killed Daniel Kasyanenko on a battlefield in eastern Ukraine. He was 19 years old.

Daniel Kasyanenko’s death reflects a truth: The notion that there is, or ever was, a cease-fire in eastern Ukraine is a farce.

I met Daniel in mid June, seven weeks before he died. We were in Pisky, a frontline city on the outskirts of Donetsk. I was there as an embedded journalist, and Daniel was there as a soldier fighting in the Ukrainian army’s 93rd Brigade. He had been on the front lines for two months.

>>> This Is What the Ukraine War Looks Like: 8 Days on the Front Line

A group of us, about a half-dozen soldiers and two other journalists, were standing inside a cluster of farmhouses on a sunny day with blue skies as the sounds of battle cut through intermittently. We all ducked at the sporadic Doppler zaps and supersonic pops of bullets passing overhead.

It almost sounded like birds chirping. Almost. So long as one forgot that each chirp was the lethal song of a trigger pulled with the intent to kill.

I was speaking English to another Ukrainian soldier, wiping away beads of sweat from my forehead (whether due to the heat or the nearby bullets, I’m unsure), when a young man with a buzz cut, tan face and narrow dark eyes looked over at me with an expression instantly recognizable as a desire to talk. He introduced himself in near flawless English and said his name was Daniel. He had a story he wanted to tell, I could see that. I asked if I could film him, and he agreed.

We talked for a while, dropping to the ground when the deadly chirping got a little too close for comfort.

“It is the DNR army shooting at us,” Daniel said, looking to the sky in the direction of fire. “The separatist Russian army.”

“So, this is … this is Pisky,” he added after another barrage of bullets, smiling and laughing like he was delivering the punch line of a joke.

Daniel Kasyanenko’s death reflects a truth: The notion that there is, or ever was, a cease-fire in eastern Ukraine is a farce.

Daniel’s fellow soldiers gave him the nom de guerre “Mobile Phone” because he was always taking photos with his cell phone. While I was in Pisky he ruined that phone, shattering the screen when he dove to the ground during an artillery barrage. He was going to ask a friend from back home to send him a new one, he said, explaining that his hometown friends had sent him his uniforms, body armor and first aid kit. The rest of his equipment came from civilian volunteers. He said the government only gave him weapons and ammunition.

Daniel told me how much he wanted to go home to Zaporizhia. He also talked about how hard it was to kill, and how it was even harder to see his friends die. He explained, revealing an understanding of human nature remarkable for a 19-year-old, that he did not hate his enemies. He said many were probably fighting for their friends like he was.

As a journalist, whose job it is to remain impartial in war, it was a challenge maintaining moral relativism toward those trying to kill me. Yet Daniel, a 19-year-old combatant, seemed to understand with an ease that eluded me the universality of duty. He didn’t take combat personally.

Daniel said he had joined the military to defend his country from what he considered to be a Russian invasion. He called it a “real war.” Yet, he said he was the only one of his friends to volunteer for military service.

“They don’t know what is war,” he told me, talking about his friends back in Zaporizhia.

He had only been on the front for two months, but he had seen combat almost every day since he arrived in Pisky. Like many Ukrainian soldiers who volunteered after the war began in spring 2014 (Daniel was part of the Karpatska Sich volunteer battalion, which was recently integrated into the 93rd Brigade), he only received a few weeks of training before leaving for the front. Most of his training occurred in combat. He would shadow the older, more experienced soldiers, learning lessons they had themselves learned the hard way. And when he saw others die, he would learn from their mistakes.

One soldier described the battlefield education of Ukrainian troops in Pisky as “natural selection.”

One poignant lesson Daniel had learned—which he explained to me over a lunch of borscht, sweetened condensed milk and salo—was to always wear eye protection. He showed me his ballistic sunglasses, which were designed not to shatter from projectiles. There was a deep divot on the right lens.

Daniel said he was in the trenches when the separatists shot at his position with a machine gun, creating a hailstorm of bullet fragments and shattered pieces of concrete from the barrier behind which he was hiding. One of those tiny pieces of shrapnel struck the right lens of his sunglasses, gouging out the divot. Without the special ballistic lens he would have lost his eye. But now he needed a new pair, he explained, adding that he couldn’t afford the expense and the Ukrainian army doesn’t supply things like eye protection. Civilian volunteers had given him the pair he had. So he planned on waiting for the next volunteer equipment delivery.

Daniel was superstitious like many of the soldiers on the front lines. He had frequent brushes with death; seconds and inches determined his fate on a daily basis. And there was ultimately no explanation for his survival that made more sense than the crucifix bracelet on his wrist, or the letter from an elementary school student that he kept tucked in the front pocket of his body armor.

Daniel was committed to the war, but admitted he was tired. He was worried about the psychological toll of the endless combat and wondered if he had seen too many terrible things to ever be a normal young man again. He feared that, at 19, his spirit was already ruined for life.

Do you get tired of the battles?

In the evenings, Daniel would come by the basement in which we lived to share a meal and talk. He had a lot of questions about life in America.

“What is Thanksgiving?” he asked. “What are the beaches like in Miami? Are the women in Los Angeles pretty? Do they really wear cowboy hats in Texas?”

His dream, he told me, was to go to America. That was why he studied English so diligently. He liked American rock and rap music, and he knew the Hollywood action movies by heart, frequently dropping quotes by Schwarzenegger, Willis and Stallone.

“Get to the chopper,” he would say in a German accent before going on patrol, quoting a Schwarzenegger line from the movie “Predator.” Ironic, since wounded Ukrainian troops are carted off the battlefield in the backs of bullet-hole riddled minivans and SUVs, not medevac helicopters.

The Ukrainian air force was banned from the conflict area according to the first cease-fire signed Sept. 5, 2014. For the past 11 months Ukrainian troops have fought from the trenches in eastern Ukraine without air support or the possibility of helicopter evacuations. Consequently, wounded Ukrainian soldiers almost never reach an emergency room within the “golden hour” of combat casualty care.

“You have no second chance here,” Daniel told me. “If you get injured, it’s just you and your medical kit. And nobody will help you, only you.”

Daniel truly knew about war, unlike the action-movie actors he could quote. And he knew it wasn’t like in the movies. Daniel, more than many soldiers twice his age, recognized the things he would have to carry with him for the rest of his life because of what he had seen and done. Daniel was supposed to stop by and say goodbye the day I left Pisky, but he never showed up. He later emailed me and apologized. The day before I left a mortar fell inside the trench he was in. The shrapnel missed him, he explained, but the concussion knocked him unconscious, leaving him with what he described as a “head contusion.” I suspected he had likely suffered a concussion or maybe even a traumatic brain injury. But after a few weeks in a hospital to recover and a couple days at home, he was back at the front.

“I’m OK, but sometimes it’s not so good,” he emailed me before he left home for the last time.

“I need to take a day off to Florida as fast as I can,” he added.

In “Into Thin Air,” his account of the 1996 disaster on Mt. Everest, Jon Krakauer wrote:

… I agree that readers are often poorly served when an author writes as an act of catharsis, as I have done here. But I hoped something would be gained by spilling my soul in the calamity’s immediate aftermath, in the roil and torment of the moment.

Thus, my writing about Daniel is not meant to cure any sadness over his death, although it helps a little, nor is it a humanist ploy to give the war a face in the hope of making you care about it.

No, explaining who Daniel was, why he fought and how he died is meant to be a warning, because Daniel’s story could have been an American soldier’s story.

And if our leaders continue to downplay what is at stake in the Ukraine war—it will be.