How Much Time ABC, NBC and CBS Have Spent Covering the Planned Parenthood Videos 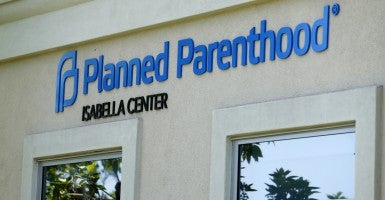 ABC, NBC and CBS have only devoted 1 minute and 13 seconds to showing video with audio from the Center for Medical Progress that shows Planned Parenthood executives discussing the sale of fetal organs, according to the Media Research Center. (Photo: Mike Blake/Reuters/Newscom)

ABC, NBC, and CBS have “censored” their coverage of undercover videos released by the Center for Medical Progress, according to an analysis conducted by the Media Research Center.

The Center for Medical Progress has also made the full, unedited videos of its meetings with Planned Parenthood executives available on its YouTube account.

The Media Research Center found that since the release of the first video on July 14, the three networks have devoted 1 minute and 13 seconds to showing video from the Center for Medical Progress with audio.

Only 6 percent of the networks’ total time spent covering the Planned Parenthood controversy consisted of playing the footage itself.

During that 1 minute and 13 seconds, no graphic footage of fetal body parts was shown, although two of the videos depict Planned Parenthood staffers dissecting fetal remains.

In 243 hours and 30 minutes of airtime since the videos were released, 0.16 percent of their coverage was about the Center for Medical Progress videos, and 0.008 percent of the time consisted of playing the videos themselves.

For contrast, according to the study, the same three networks spent 88 minutes over the course of 3 days covering the undercover video of then-Republican presidential candidate Mitt Romney’s “47 percent” comments.

They also spent more than 2 hours in 3 and a half days covering the undercover video of former Los Angeles Clippers owner Donald Sterling’s racially charged remarks.

In a previous study by the Media Research Center, Yoder writes that the anchors and correspondents at the networks have not used the word “baby” in their coverage, opting instead for terms like “aborted fetuses” and “fetal organs.” CBS once used the phrase “body parts.”

Spokespersons for ABC, NBC, and CBS did not immediately respond to The Daily Signal’s request for comment.