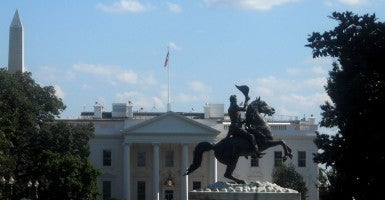 The Democratic Party plans to delete its association with Thomas Jefferson and Andrew Jackson, its founding fathers.

As the New York Times recently reported, several state Democratic Party affiliates are dropping both Jefferson and Jackson from the party’s name. Georgia, Iowa, Connecticut and Missouri have already done so. It is likely only a matter of time before the national party renames its famed Jefferson-Jackson dinners.

The Democratic Party, it seems, is living out the very promise it offers to its followers: just like individuals can will their own identity and obtain complete, self-determining autonomy, so too can political parties.

That promise is of course illusory, although the Left has much at stake in the short-term in ignoring this fact.

Some may object that getting rid of those presidents won’t change a thing: today’s Democratic Party listens to Jefferson’s wisdom like an unruly child listens to its parents’ commands.

Perhaps; but overtime this could be significant. Why?

First, in a republic, political parties should be revered for more than just raw power. The majesty given to a party by using these presidents’ names is significant for its respectability. And these are not just any presidents: Jefferson authored the document upon which our nation was founded, the Declaration of Independence; Jackson was the first to make common cause on behalf of ordinary citizens.

Contemporary party leaders should view themselves as part of a tradition of great statesmen. Honoring a tradition in turn guides party leaders’ sense of responsibility and moderates individual pride and selfishness. For these reasons, parties must have origins and a lineage that articulates what they are, and what they stand for.

Having no anchor, no image of a single remarkable person worthy of reverence, nor an ideal represented in that person, diminishes a party’s respectability—and ultimately its effectiveness.

Thus, unmoored, a party becomes both freer but unguided. How then, to stay alive and relevant if not through principle, majesty, or tradition?

Once all idealism and therefore self-restraint is lost, manipulating passions becomes a business. The party is forced to be a creator, manager, and flatterer of factions.

This leads to a conundrum: to stay alive, a party in such a condition is forced to enflame passions, spread their flames, and then try to manage them. But finding such passions unmanageable, they will be forced to create new passions to make the previous ones subside or take a new direction.

One such example is manufacturing the alleged problem of income inequality, which has even been accused of causing the Ebola outbreak.

Yet sometimes those same popular passions turn against the party itself, as they have made their constituents ungovernable. The party becomes corrupt, and it in turn corrupts.

Moreover, unmoored from any acknowledgment of their origins and therefore of their original purpose, a party no longer looks upon itself as an educator of the public.

As such, its task is no longer elevating citizens’ minds by calling them to their duties. Guidance and education were once considered a central to a political party mission, by Lincoln and the Federalist, for example. They understood the distinction between ennobling and flattering.

Without this self-understanding, a party becomes a vehicle for the most powerful factions of the moment.

Despite the Left’s hatred for tradition as a principle, it is required so that raw, changing passions can’t have their way in the nation’s affairs. Without a source of reverence or a permanent guiding principle, the Democratic Party will place itself into contradiction after contradiction.

As a country it should be obvious that we honor our Founders for their greatness, not for their errors. Our ancestors were not merely wildly indecent people.

The Democratic Party once stood for the common man and the principle of equality, hence their admiration for Jefferson and Jackson. No one honors them for slavery.

Is there freedom of thought if we can’t admire anyone from the past? Indeed, suggesting that the past is full of only ignoramuses is the easiest way to flatter oneself.

This psychological state produces self-worshipping mantras such as: “We are the ones we’ve been waiting for. We are the change that we seek.” To make it politically incorrect to revere anyone of the past is to see no superior wisdom outside of momentary popular demands.

In fact, the Founders’ superior wisdom should be honored since, among many other things, they predicted the likelihood of individuals with “talents for low intrigue, and the little arts of popularity” coming to garner public respectability, as they no doubt have today.

The abandonment of Jefferson and Jackson is not the cause, but perhaps a harbinger, of the contemporary Left’s intellectual confusion. Parties require either principled guidance or reverence for and imitation of greatness—otherwise, public opinion, factions, and passions govern them.