New Government Rule Would Regulate Almost Every Type of Water in US. Here Are 3 Problems With the Rule. 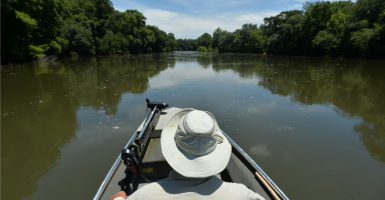 Once again, the federal government is making a power grab. (Photo: Brant Sanderlin/TNS/Newscom)

The Environmental Protection Agency and the Army Corps of Engineers’ final water rule under the Clean Water Act seeks to regulate almost every type of water in the country. And you don’t even need to get into the substance of the rule to know it’ll be a disaster. Here are three signs that this rule should be killed off immediately.

The EPA engaged in controversial activities to help get support for the water rule. It launched a video and social media PR campaign asking: “Do you choose clean water?” As if critics of the rule want dirty water.

And that was just one gambit. According to the New York Times, “[l]ate last year, the EPA sponsored a drive on Facebook and Twitter to promote its proposed clean water rule in conjunction with the Sierra Club.”

The agency also kicked off a Thunderclap campaign to drum up support. “We hope you’ll support our clean water proposal. To help you do that, and get your friends to also voice their support, we’re using a new tool called Thunderclap; it’s like a virtual flash mob.” The message was sent to about 1.8 million people.

In addition to these Astroturf campaigns, EPA Administrator Gina McCarthy dismissed legitimate public concerns about the proposed rule as “ludicrous” and “silly.” It could hardly be said that the EPA was encouraging people from all perspectives to participate when the head of the agency calls some public concerns ludicrous and silly. The message to those who had reservations about the proposal was clear: don’t even bother expressing criticism, because we will either mock it or ignore it.

Sign 2: The Rule Is Best Described as “Uncooperative” Federalism.

Nothing says cooperative federalism quite like at least 29 states (and more likely to follow) suing the federal government over the water rule.

Sign 3: The Agency Appears to Hate the Rule as Much as the Public Does.

In memos dated from April 24, 2015 to May 15, 2015, the Army Corps of Engineers savagely criticized the draft final rule. Yes, this is the same agency that decided (apparently) to put its name on the final rule when it was released on May 27, 2015. It should be noted that the Corps apparently wanted to go even farther with the regulation than the EPA in some regards, but it’s the criticism of the rulemaking process that is so important for anyone concerned with the rule.

Here are some highlights from the Corps’ springtime commentaries:

“The rule’s contradictions with legal principles generate multiple legal and technical consequences that, in the view of the Corps, would be fatal to the rule in its current form.”

The Corps completely tore apart the EPA’s economic analysis and technical support document, and explained as late as May 15, 2015 (less than two weeks before the final rule was released):

In the Corps’ judgment, the documents contain numerous inappropriate assumptions with no connection to the data provided, misapplied data, analytical deficiencies, and logical inconsistencies.

The Corps also tried to make sure it wasn’t associated with the economic analysis or technical support document:

However, the Corps had no role in selecting or analyzing the data that EPA used in drafting either document [economic analysis or technical support document]. As a result, the documents can only be characterized as having been developed by the EPA, and should not identify the Corps as an author, co-author or substantive contributor[.] … Finally, the Corps of Engineers logo should be removed from these two documents.

To what extent these concerns were addressed in the final rule still needs to be clarified. However, it’s highly unlikely, especially given how late the Corps was expressing its concerns, that EPA made significant changes to the final rule in response to this massive criticism.

The water rule is a disaster. There’s no maybe about it. Even environmental groups are suing the agencies (albeit for not going far enough). This rule isn’t about protecting water; it’s about protecting these federal agencies’ ability to regulate more water at the expense of property rights. Congress needs to do what it can to stop getting pushed around by these agencies. Its first job should be simply to kill off this rule immediately.