ISIS Is Urging Supporters to Target Military Families. What US Should Do. 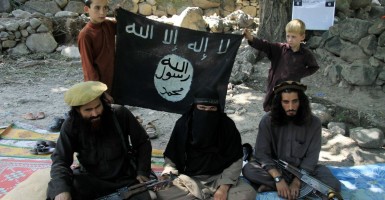 ISIS now claims it has the names, home addresses and other personally identifiable information of thousands of U.S. military personnel and government employees.

It’s called for “local” supporters to use the information to attack the Americans listed. ISIS posted this data for about 1,400 people, but asserts this was just one percent of the data it has available.

The U.S. military has already been warning its members and their families to be careful about what they post on social media – should ISIS choose exploit them.

Many military posts are conducting anti-terrorism classes for their personnel, not to prepare for overseas deployment (the normal use of such classes in the past), but to increase their protective posture at home station.

This new wider push on the Internet by ISIS shows a much higher degree of Internet sophistication than any previous terror group has shown. The result is ISIS now has a greater capacity to recruit individuals here in America who wish to do harm.

Remotely radicalized individuals (also known as lone wolves) remain the most likely terrorist threat at home. These actors are very hard to stop preemptively, as they give very few “warning signs’ before their acts.

Fortunately they are also generally poorly trained (or completely untrained), have no real support networks, and are incapable of really spectacular 9/11 style sophisticated attacks.

This is not to discount the danger they pose, or the fear they cause (If the one casualty is you or your loved one, it is still a huge tragedy).

The bottom line is that ISIS is a determined enemy in western Iraq and eastern Syria, who is standing up to the rather anemic U.S. lead efforts to dislodge it.

In addition, ISIS has sent Twitter messages that threaten the U.S. and its citizens specifically.

The tweets are laced with vile “promises” of violence and include lots of graphic photos of previous ISIS atrocities and past U.S. casualties.

Clearly, ISIS sees Twitter and other forms of social media as their own private PSYOP (Psychological Operations) outlets.

Since the enemy wants martyrs, America should, learning from the example of the fine young policeman in Garland, Texas, assist ISIS supporters in achieving that status as quickly as possible.

To accomplish this we must: work to crush ISIS in the Middle East and remove their credibility, create a much bigger and more effective effort to counter their digital messaging, and renew the effort to increase awareness, education, and training of our own personnel to make them more secure and better prepared to protect themselves.