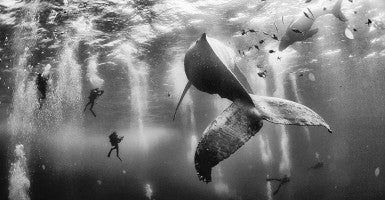 The National Geographic Traveler photography contest is known for its out-of-this-world images of Earth. This year’s contest, the 27th of its kind, did not disappoint.

Below are the top winners, plus a few of our favorites. All captions were contributed by the photographers.

“I was taking photos near the head of the whale, and all of a sudden she began to swim toward the rest of the diving team,” Patjane told National Geographic. “The divers gave the whale and her calf space, and I just clicked at the moment when the flow and composition seemed right.” “Diving with a humpback whale and her newborn calf while they cruise around Roca Partida … in the Revillagigedo [Islands], Mexico. This is an outstanding and unique place full of pelagic life, so we need to accelerate the incorporation of the islands into UNESCO as [a] natural heritage site in order to increase the protection of the islands against the prevailing illegal fishing corporations and big-game fishing.” “[This] gravel-crush working place remains full of dust and sand. Three gravel workmen are looking through the window glass at their working place. Chittagong, Bangladesh.” “Camel Ardah, as it [is] called in Oman, is one of the traditional styles of camel racing … between two camels controlled by expert men. The faster camel is the loser … so they must be running [at] the same speed level in the same track. The main purpose of Ardah is to show the beauty and strength of the Arabian camels and the riders’ skills. Ardah [is] considered one of the most risky situations, since always the camel’s reactions are unpredictable [and] it may get wild and jump [toward the] audience.” 5. Another merit winner, “A Night at Deadvlei” was captured by Beth McCarley. “The night before returning to Windhoek, we spent several hours at Deadvlei, in Namib-Naukluft National Park, Namibia. The moon was bright enough to illuminate the sand dunes in the distance, but the skies were still dark enough to clearly see the Milky Way and Magellanic Clouds. Deadvlei means ‘dead marsh.’ The camelthorn trees are believed to be about 900 years old but have not decomposed because the environment is so dry.”

6. A merit winner in the Spontaneous Moments category, “Catching a Duck,” by Sarah Wouters. “Two boys are trying to catch a duck at the stream of the waterfall. Nong Khai Province, Thailand.” “This was my first time visiting the Painted Hills in Oregon. As the evening light settled in, the hills started to give off a nice glow. Using my zoom lens, I picked this view for the converging lines.” “Three climbers making their way down after reaching the summit of Huayna Potosi mountain in Bolivia. They stopped to admire the breathtaking view as the sun had come up behind them.” “After arriving later in the afternoon than I would have wanted to shoot sunset at the Great Sand Dunes National Park we hurried up to the top (700′) and were able to witness one of the most amazing displays of light I’ve been able to capture. I had just purchased a Lightning Trigger which helped capture the long distance bolts. To best represent the scene 2 photos were taken in close proximity for best dynamic range.” “fog appears in the Victoria Harbour in Hong Kong during late January till March each year, wake up in the middle of the night and wait in Peak for hours for the fog to go off so as to take this picture”

11. Taking in the Yosemite Valley, California from a unique perspective,“Travel to Nowhere” was photographed by Sebastian Wahlhuetter. “An adventurer sitting on a small line between the Lost Arrow Spire and the main wall in Yosemite Valley with literally nothing than air under his feet.”

12. “Ray of Light” by Zoe Fidji was shot in Rio de Janeiro, Brazil. “I took this photo while the football brazilian team was playing for the world cup, the beaches and the streets were all deserted, everyone was watching the game,it was kind of surrealistic to see this usually crowded beach at sunset completely empty except this kid who was playing in the waves, maybe he couldn’t have access to a tv or maybe he just didn’t care, anyway he was really enjoying the beach for himself and so did I!” “Beautiful tornado tracks in open farm land narrowly missing a home near Simla, Colorado. This tornado was Anticyclonic as well which rotates in a clockwise direction in the Northern Hemisphere, normal rotation which is cyclonic in nearly 98 percent of tornadoes” “The Indian team show support for the friend’s in the USA Street Team. In 2014 I was out with charity called Street Child World Cup, which was held in Rio, Brazil. 230 children from 19 different Countries. Football has changed the lives of these children as it gives them something to aim for, to keep up education and training to see something become of themselves.”

16. Roie Galitz’s “Run for Your Life” depicts a cheetah and gazelle in Tanzania. “The mother Cheetah is chasing the Thomsons Gazelle in the high speed action chase in the Serengeti, Tanzania. This is the run for their lives, since one of them will die after the chase – the Cheetah and cubs who haven’t eaten in days or the Gazelle who might become their meal. They are both focused with their entire energy on every move and every step. At the end of the chase, the Cheetah mother and cubs had a good dinner. This is certainly one of the most exciting images of my life.”

17. “Hang out” by Sebastian Wahlhuetter. “People relaxing in hammocks around 40 meters above the ground. This took part in an annual highline meeting in Monte Piana, in the Italian Dolomites last autumn. For some it might look like a nightmare to dangle so far above the ground but for some this was just the way to take a rest.” “During our trip to the Amalfi Coast, my husband and I noticed how many tourists had selfie sticks and started taking photos of them because they looked ridiculous. So I was especially thrilled to see this man on the chairlift up to Anacapri – as I was riding down in the opposite direction. As you can see by his expression, he seemed more concerned about getting the selfie than enjoying the beautiful view below. A sign of the times?”