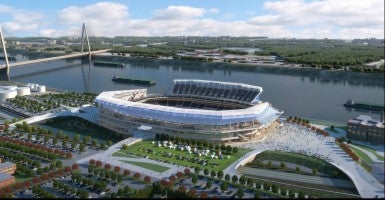 Renderings of a proposed new riverfront stadium for the St. Louis Rams of the NFL

A judge has ruled that the city of St. Louis can use tax dollars to fund a billion-dollar NFL stadium, invalidating a city ordinance that would have required a public vote for approval.

Last week, St. Louis Circuit Court Judge Thomas Frawley ruled in favor of a plan to use city funds in a proposed $998-million riverfront stadium for the St. Louis Rams.

Earlier this year, there was speculation that St. Louis Rams owner Stan Kroenke was considering moving the NFL team to the west coast, after a proposed $1.86-billion stadium in Inglewood, Calif. was approved.

Missouri Gov. Jay Nixon formed a “stadium task force” to develop a plan in an effort to convince Kroenke to keep the team in St. Louis.

With strong safeguards & substantial private investment, we’re making sure stadium plan is a good deal for taxpayers in #STL and across #MO

The plan was met with opposition, after it had been revealed that millions in state and city bonds, tax credits and incentives were planned to finance the stadium project.

Critics argued that the proposed financing options violated a 2002 city ordinance that prohibited public funds from being used to finance a professional sports facility without voter approval.

John Ammann, a law professor at Saint Louis University, sued the city on behalf of two St. Louis residents for failing to hold a public vote and hearing on the financing of the stadium project.

However, Frawley’s recent ruling voided the city ordinance. Frawley claimed that the ordinance was too “vague” to enforce and that it conflicted with a statewide statute.

Hans von Spakovsky, senior legal fellow at the Heritage Foundation, argues that though the judge’s decision is valid, it thwarts the will of the public.

“The Missouri legislature should act immediately to repeal these state statutes that interfere with the ability of voters to make a decision about the financing of a new stadium,” von Spakovsky said. “They are the ones who will be burdened with paying for a new stadium for a team owner worth $6 billion. Once again, taxpayers are getting the shaft.”

St. Louis Mayor Francis Slay supports the deal, seeing it as an opportunity to keep the NFL in the city.

“Having an NFL team in a city is really, I think, a huge amenity,” Slay said. “It’s one of the things that make living in a big city fun.”

David Boaz, vice president of the Cato Institute, told The Daily Signal that the increase in the public financing of stadiums should be checked with the approval of voters.

“Every city wants to be known as a major league city, and the billionaire sports team owners understand that mayors and governors want to govern major league cities,” Boaz said. “It clearly seems like a good idea to ask taxpayers whether they should invest this much of their money in a new stadium for a billionaire owner.”

Slay, meanwhile, believes that the stadium is an important “investment” for the city’s future. He will not move forward with a public vote.