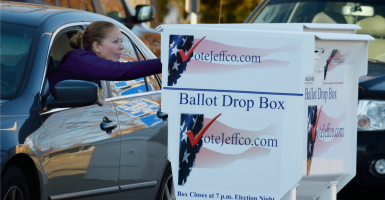 There is lack of effort to make sure voter rolls stay updated. (Photo: Bob Pearson/EPA/Newscom)

Joseph Vanderhulst is an attorney with the Public Interest Legal Foundation, a nonprofit law firm dedicated to protecting and restoring election integrity. Contact him at jvanderhulst @publicinterestlegal.org.

Last week, the Public Interest Legal Foundation launched a project to clean up America’s voter rolls. Their lawsuit is based on a decades-old statute that requires states and counties to make reasonable efforts to maintain their rolls.

The problem is, no one is enforcing it.

The Justice Department has the authority to enforce the requirement. But with this “Justice” Department, some issues of justice are created more equal than others.

The National Voter Registration Act (NRVA) of the early ’90s made it mandatory for states to offer voter registration as part of driver’s license applications and other state-provided services. The idea was to make sure everyone who should be registered to vote gets registered. And the Justice Department has had no problem zealously enforcing this requirement.

But the same law requires states to keep their rolls clean at the same time. A lesser known component of the Act requires that states and counties put in place consistent and effective programs to maintain their voter lists. This includes seemingly obvious things like monitoring deaths and checking in with people who have moved.

And make no mistake: the government should be enforcing list maintenance obligations. Every year, the Election Assistance Commission publishes voter registration data. The results are grim. In several hundred counties across the country, there are more registered voters than there are living citizens.

Thankfully, the law permits private individuals and groups to step in and force states and counties to at least make a reasonable effort to ensure that dead people aren’t registered.

Last week, the Public Interest Legal Foundation filed a lawsuit in federal court in Mississippi to get Clarke County to clean up its rolls. According to census data, the county has 12,646 registered voters but has a voting-age population of only 12,549. The Foundation represents the American Civil Rights Union, who sent a notice letter to Clarke County in June 2014 describing the potential problems with the rolls. The county never replied. Mississippi has statewide elections in 2015.

Clarke Country is just one of hundreds of counties in the country with bad rolls. And without enforcement from the government, it is left to groups like the Public Interest Legal Foundation to clean up the rolls ahead of the 2016 elections.

But never mind enforcing the voter laws we have on the books and making sure that American elections operate without corrupt rolls. For the Justice Department, it’s far more important to police elections for hosting the World Cup.