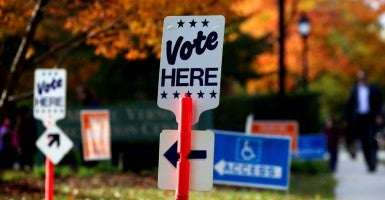 The free-for-all boxing match among the U.S. Election Assistance Commission (EAC), the League of Women Voters, the NAACP, Kansas, and the U.S. Department of Justice (DOJ) resumed on Wednesday, March 9.

They’re tussling over the right of states to require proof of citizenship from people using the federal voter registration form.

In Courtroom 18 of the D.C. federal courthouse, Judge Richard Leon presided over a sometimes contentious hearing on the plaintiffs’ request for a preliminary injunction that would rescind the Election Assistance Commission’s change of the instructions on the federal voter registration form to accommodate a request by Kansas. The Sunflower State wants the form to note that Kansans wishing to register must meet a proof of citizenship requirement.

At the first hearing in this case on Feb. 22, Leon refused to grant a temporary restraining order requested by the League of Women Voters and the NAACP, the plaintiffs who don’t want the Election Assistance Commission to mention proof of citizenship.

Rather than take that as a warning about the Department of Justice’s potentially unethical and unprofessional behavior in refusing to carry out its duty to defend its client, the Federal Programs Branch came into this week’s hearing once again trying to lose the case.

The Justice Department’s lawyer told Leon that it was willing to agree to a preliminary injunction. While Leon gave the lawyer for the plaintiffs, Michael Keats, 30 minutes to argue his motion for a preliminary injunction, he gave the Justice Department only 10 minutes, since it was essentially on the same side as the plaintiffs.

When the lawyer said it would be only a “couple of hundred pages,” Leon asked, “Why would it take” so long to prepare the record? Pointing at the government lawyers at the table, he remarked: “You’ve got quite a sizable team helping you there, Mr. Thorp. Of course, I realize some are along for the ride, but you’ve got lots of lawyers in the Federal Programs Branch.”

He obviously was not satisfied with the Justice Department’s answers.

Leon then asked the Department of Justice about an issue that arose after the earlier hearing. The State of Kansas, represented by Secretary of State Kris Kobach, had been granted intervention in the lawsuit to do what Department of Justice is refusing to do: defend the Election Assistance Commission.

The Department of Justice was so concerned over McCormick’s testimony and the internal communications between DOJ and the EAC produced for the deposition that it asked Leon for a protective order sealing the deposition.

But the Justice Department’s attempt to keep them from coming to light suggests that the conflict of interest mentioned in McCormick’s letters may be very serious, indeed. Given the discussions in the courtroom, it is also clear that the broad protective order includes information that is publicly available. In other words, DOJ is seeking to hide information that is already public and should not be sealed.

Leon asked the Justice Department if it was really taking the position that it “has the exclusive authority to decide whether a privilege is waived or invoked” and that the “independent agency”—in this case the EAC and Commissioner McCormick—cannot waive it.

The attorney/client privilege runs only one way—the client has the right to waive it at any time, even if the lawyer doesn’t want to reveal what he told or advised the client. Leon asked the struggling lawyer if he could name “any statute or any case precedent, Supreme Court on down, that a Commission created by Congress doesn’t have the authority to invoke or waive attorney-client privilege[.]”

The lawyer could not provide any such legal precedent for what Judge Leon termed the “hyper-aggressive position” of DOJ. In fact, the judge said “there is no such authority. We’ve looked. There is no such authority anywhere[.] … Indeed, the cases that we were able to find indicate and refer to the privilege as the agency’s privilege. It’s the agency’s decision to waive it or invoke it.”

It is also noteworthy that the director of the Federal Programs Branch, John Griffith, was sitting at the counsel table.

When the judge was grilling Justice Department attorney Galen Thorp about what the Department’s legal authority and actual position were, one might have expected the head of the branch to confer with Thorp, who was clearly confused and didn’t know what to say or what theory to advance. While this question of litigation strategy should have been prepped ahead of the hearing, it is odd that, rather than clarifying the Justice Department’s position, Griffith was satisfied with the confusion he could have easily remedied on the spot.

Michael Keats, the plaintiffs’ lawyer, gave an often rambling, disjointed presentation. Just as at the last hearing, he did not seem to have an in-depth knowledge of the facts or applicable election law, because the other lawyers at his table kept passing him notes to help him answer Leon’s questions (something that would have been welcome in the case of the unprepared DOJ attorney).

After Keats sat down and Kansas Secretary of State Kris Kobach started his counterargument, Keats, who is a partner in the New York law firm Stroock & Lavan, made the type of mistake one would expect from a less experienced attorney. Twice he jumped to his feet trying to object to Kobach’s oral argument.

Objections are something you make during a trial, not during oral arguments in a motion hearing. The third time Keats started to object, an obviously annoyed Leon waived him down and told him “to lower his blood pressure.”

Kobach did another fine job in explaining why the plaintiffs do not meet the exacting standards for the issuance of a preliminary injunction. His main point was that the Election Assistance Commission had an obligation under federal law to change the instructions on the federal form to conform with state law eligibility requirements, as it has countless times in the past on other issues.

The National Voter Registration Act specifically says that the form shall contain such information “as is necessary to enable the appropriate State election official to assess the eligibility” of a potential voter. Thus, whatever the state believes is “necessary” must be included with the form.

Here, the Election Assistance Commission did exactly what the statute tells it to do—it provided information in the instructions for the use of the federal voter registration form by residents of Kansas, telling them that the state believes that proof of U.S. citizenship is necessary to assess their eligibility.

Kaylan Phillips of the Public Interest Legal Foundation, another intervener, also got five minutes to argue on behalf of the Election Assistance Commission. She pointed the judge to evidence of noncitizens registering to vote in states without a proof of citizenship requirement—as well as this Justice Department’s refusal to prosecute noncitizens who have been caught.

Leon took the case under advisement and gave all sides an additional 10 days to file supplemental briefs. Hopefully, in the interest of election integrity, he will refuse to issue a preliminary injunction.

But Leon should also consider lifting the protective order on the deposition. Any documents that show misbehavior and possibly unethical behavior by Justice Department lawyers should not only be made public, but be forwarded to the Office of Professional Responsibility and the inspector general at the Justice Department. Here, the public interest clearly outweighs any potential privilege.