What We Can Do to Boost Graduation Rates 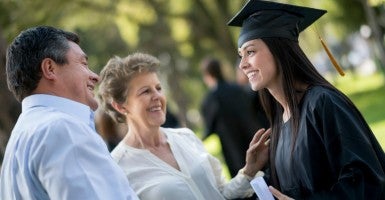 High school graduation remains a crucial rite of passage. The National Center for Education Statistics estimates that in 2013, the median earning for workers with a high school diploma was 26 percent higher than for those without it.

Differences in high school graduation rates reflect achievement gaps among major student subgroups’ outcomes on academic assessments. A 2011 study by the National Center for Education Statistics found that children from low-income families were more than five times as likely to drop out of school as those from high-income families. Black and Hispanic students drop out of school at rates more than double the rate of white students.

The United States Department of Education’s Institute of Education Sciences conducted a high-quality random assignment study of the District of Columbia Opportunity Scholarship Program (OSP). OSP is a voucher program for low-income D.C. students. The graduation rate for OSP students who used vouchers was 21 percentage points higher than of that of the control group. OSP students were statistically among those least likely to graduate (i.e., they were low-income students attending a large urban public school district), so this increase in graduation rate reflects a strong return on investment for the program.

Looking forward into America’s future, increasing the high school graduation rate and the overall quality of instruction looms as a crucial need. The leading edge of the baby-boom generation began qualifying for federal entitlement programs in 2008.

Analysts estimate that an average 10,000 baby boomers per day will reach retirement age between now and 2030. This will represent an unprecedented graying of the American public, and the Census Bureau also projects an increase in the youth population to accompany it. Many of the middle-aged taxpayers of the year 2030 and beyond sit in American classrooms today. The more who graduate and reach their full potential, the better.

America badly needed the recent small improvement in graduation rates. She needs much more still. The expression “a mind is a terrible thing to waste” has always been true. The cost of this waste, however, looks set to soar higher in the future.

With trillions in unfunded liabilities in our entitlement programs, policymakers must focus on policies—like charter schools, school vouchers and account-based choice mechanisms—that deliver a greater bang for the education buck and meet the needs of individual students.