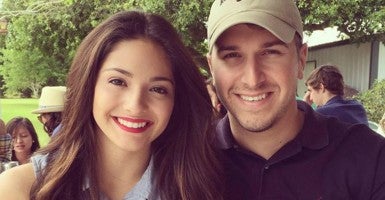 Mayci Breaux will be remembered as much more than a slain victim of Thursday evening’s tragic shooting in Lafayette, Louisiana.

Breaux, 21, was an honor student at Louisiana State University at Eunice, studying to become a radiology technician.

We are in shock and mourning over the loss of one of our own, Mayci Breaux. Our thoughts are with all of the victims and their families.

She had plans to marry and start a family with her longtime boyfriend Matthew Rodriguez. She was also active in the pro-life movement.

According to a February 2013 issue of the St. Mary and Franklin Banner-Tribune, Breaux was involved in campus ministry and the pro-life club during her time at Hanson Memorial High School.

In 2011, Breaux visited Washington, D.C., with her classmates in order to participate in the annual pro-life demonstration the March for Life.

Breaux and boyfriend Rodriguez were watching Amy Schumer’s new film “Trainwreck” at the Grand 16 Theater in Lafayette Thursday evening when 59-year-old John Russell Houser began firing a handgun, striking both Breaux and her boyfriend, along with nine others.

My heart is broken and all my thoughts and prayers are with everyone in Louisiana.

“They were so good for each other,” Breaux’s mother Dondie told the Daily News of Breaux and her boyfriend. “They had so many plans—just to get married, have kids. I think it would have been soon.”

“I lost one of my best friends,” she added.

Breaux’s little sister Ali, who will be 17 tomorrow, told the Daily News that she “always wanted what [Breaux and Rodriguez] had because it was just so great.”

21 year old, Mayci Breaux is one of the victims in the #LafayetteShooting. pic.twitter.com/9dsc1I2aEv

“We talked about her wedding, how I’d be her maid of honor, about us having kids at the same time, how we’d all be close,” Ali said, adding that the devastating news had yet to fully set in. “I’m just sort of numb. It hasn’t really processed completely.”

Breaux was the only person who died at the scene. The gunman tried to flee before turning the gun on himself and ending his own life. No motive has yet been identified.

The other victim of the shooting, 33-year-old artist Jillian Johnson, died a short time after being rushed to a nearby hospital. In a Facebook post about her, Johnson’s family called her “a once-in-a-lifetime gal. A mother, daughter, sister and a truly exceptional wife. She was an artist, a musician, an entrepreneur, and a true renaissance woman.”

I would ask everyone to take a moment and pray for the victims that are injured and those families who have lost a loved one. (3/3)

Meanwhile, Col. Michael Edmonson of the Louisiana State Police asked press conference attendees to not let the shooting overshadow the lives of the deceased.

“Don’t lose sight of the fact that these two individuals had a vision, had a name, had a future,” he said. “It wasn’t to die as they did horribly in this theater here.”