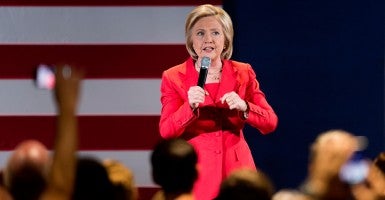 The candidates spelled out their political philosophy for the future of the United States.

Below is a summary of each candidate’s address, including the major themes they shared with voters.

Lincoln Chafee The former governor of Rhode Island, Chafee, made foreign policy the central issue of his talk with a particular focus on the Middle East and North Africa. “We have a choice in 2016,” Chafee stated, “prosperity through peace or endless war.” Chafee commended President Obama’s deal with Iran. “This week, we had the great news of a breakthrough with Iran. What a change.” Avoiding war “is the right way to make the world safer,” said Chafee, a former Republican who became a Democrat after losing his seat in the U.S. Senate. Chafee also supports policies to protect the environment and quality health care “for all,” to name a couple.

Hillary Clinton The former secretary of state, who called herself “just a grandmother,” honed her message focusing on family and economic issues. Clinton said, “You should be able to get ahead and stay ahead. And we [Democrats] believe that the measure of our success should be how much incomes rise for hardworking families, not just for CEOs and money-managers.” On paid work leave, earned sick days, child care and minimum wage Clinton said, “These are not women’s issues. They’re family issues and they are economic issues.” She said ensuring that women with children can work if they wish to is a “growth strategy.” Clinton will fight for equal pay for women as well as marriage equality.

Martin O’Malley As the former Maryland governor, O’Malley touted his 15 years of executive experience. “We must take actions that actually lift incomes and wages again for all Americans.”

O’Malley wants a $15 minimum wage and Social Security to be expanded. He told the crowd that it should be made easier for employees to join a labor union “and collectively bargain for better wages.”

Jim Webb The last candidate to join the Democratic ticket was Webb, who was also the last to take the stage Friday night. The former Virginia senator started his message by having the veterans in the room stand to be recognized. Webb is a former secretary of the U.S. Navy.

Of his time in the Senate, Webb wrote and introduced the post-9/11 GI Bill. He said that more than 1 million veterans have been able to get access to education cost coverage since that time.

Having served in the military himself, Webb said he has “great concern” about the agreement signed with Iran. This is in contrast to the views of the other four candidates that spoke.

“I would not as president sign an agreement establishing a long-term relationship with Iran if it in any way tips the balance of power in that vital region of our world,” Webb said. “I would never accept directly or indirectly accept Iran’s acquisition of nuclear weapons.”