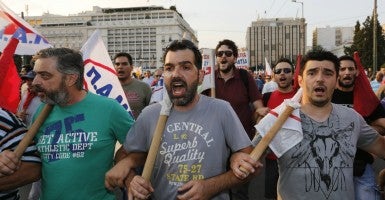 Eurozone leaders pulled all-nighters in Brussels over the weekend to craft yet another last-minute reprieve for Greece—its third bailout deal in the last five years—that was announced this morning, but that country’s long-term economic problems remain.

Before receiving an €86 billion euro loan package from the European institutions, the Greek parliament must approve further budget cuts and economic reforms by Wednesday.

But until Greece adopts fundamental political and economic reforms, it is likely to repeat the same mistakes again and again, and remain one of the least economically free countries in Europe.

Ironically, many of the conditions of the bailout loan are even tougher than the ones Greek voters rejected in a referendum less than two weeks ago.

Prime Minister Alexis Tsipras, the politician from the far-left Syriza party elected in January with a mandate to end austerity measures imposed by the first two bailouts, now proclaims that the deal is a good one for Greece.

For Tsipras the deal is a good one because it would require adoption of streamlining tax reform measures to cut down on tax evasion and increases in Greece’s Value-added tax (VAT) to generate more government revenues.

While higher taxes are always the first solution sought by socialist parties such as Syriza, Salim Furth of The Heritage Foundation has shown that tax increases do more harm than good. Greece needs reforms that encourage economic growth and contain the costs of government, not ever-higher taxes to repay irresponsible creditors.

One of the most controversial and sensitive aspects of the deal is the requirement that 50 billion euros worth of state-owned assets be privatized.

A disagreement this morning between Tsipras and German Chancellor Angela Merkel over the proceeds of those asset sales almost scuttled the deal.

As the Index of Economic Freedom reports, the rule of law is weak in Greece and corruption is pervasive.

Despite some past efforts to create a more business-friendly regulatory environment, the labor market remains rigid and slow to adjust to market realities.

The Wall Street Journal summed up the gloomy prospects for Greece well in an editorial today:

The danger now is that Greeks will be stuck with the tax hikes Syriza wants and the pension cuts that are easiest for creditors to monitor, while more important reforms gather dust. That’s a recipe for more years of stagnation, and a continuing political threat to Greece’s place in the eurozone.

For now the supposedly great unifying project of the European Union remains intact, with continuing membership in the eurozone coming at the price of ongoing and painful reforms in the EU’s southern tier.

Until the citizens of Greece insist that their political and economic leaders confront these underlying problems and solve them, however, look for more all-nighters in Brussels—sooner or later.