How San Francisco Aided and Abetted the Murder of Kate Steinle 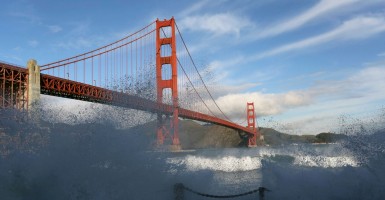 After admitting to shooting and killing 32-year-old Kate Steinle, Juan Francisco Lopez-Sanchez, an illegal alien, was asked why he had come to San Francisco.

He responded that “he knew San Francisco was a sanctuary city where he would not be pursued by immigration officials.”

“Sanctuary cities” are cities within the United States that refuse to comply with federal immigration laws and authorities—similar to the defiance of Southern states to federal law during the civil rights era.

By some estimates, there are more than 150 U.S. cities that are endangering the safety of their citizens by refusing to turn over dangerous, criminal aliens to the Department of Homeland Security or inquiring about the immigration status of suspects when they are arrested.

So when Juan Francisco Lopez-Sanchez, seven-time convicted felon and five-time deportee, arrived in San Francisco, authorities were none too concerned with complying with U.S. Immigration and Customs Enforcement (ICE).

Although ICE had Lopez-Sanchez in custody in March 2015, the agency transferred him to local authorities in San Francisco to be prosecuted on a drug-related charge.

ICE filed an “immigration detainer,” and requested that the San Francisco authorities notify them before releasing Lopez-Sanchez after his prosecution.

For reasons unknown, San Francisco authorities decided not to prosecute Lopez-Sanchez on the drug charge and then blatantly ignored the detainer and the prior request by ICE to return Lopez-Sanchez to its custody.

Instead, they let this killer walk free. Now, Kate Steinle is dead, and her family is left to grieve.

While it was Lopez-Sanchez who pulled the trigger, it was the city council of San Francisco and its mayor who aided and abetted her murder through their defiant, reckless, and dangerous sanctuary policy.

There is no question that this tragedy could have been avoided if not for the San Francisco policy, particularly given that even ICE characterized Lopez-Sanchez as an “enforcement priority,” according to a spokeswoman for the agency.

But San Francisco’s policy is to refuse to “honor U.S. Immigration and Customs Enforcement (ICE) detainers unless they are supported by a judicial determination of probable cause or with a warrant of arrest.”

What should really infuriate the family of Kate Steinle is that this horrible, tragedy could have been prevented.

Not the First Time

It is not the first time convicted felons have been shielded from deportation by sanctuary cities, only to commit violent crimes following their release from prison. It is not even the first time it has happened in San Francisco.

In 2008, the Bologna family suffered the same tragedy. Edwin Ramos, a member of the notorious MS-13 gang, cold-bloodedly murdered three innocent residents, Tony Bologna and his two teenage sons, Michael and Matthew Bologna, on the streets of San Francisco as they came home from a family barbecue.

Prior to committing the triple murder, Ramos had been convicted of two violent felonies as a juvenile: a gang-related assault and the attempted robbery of a pregnant woman.

But because the city’s policy is to ignore immigration status, federal immigration authorities were never informed that two-time felon Ramos was in the country illegally.

Instead, San Francisco along with other cities have created sanctuaries for criminal conduct by aliens, shielding them from the federal government, and enabling them to continue to victimize innocent Americans.

San Francisco and Other Sanctuary Cities Are Breaking the Law

San Francisco is directly violating federal law, as are all of the other sanctuary cities. Under Section 642 of the Illegal Immigration Reform and Immigrant Responsibility Act of 1996 (8 U.S.C. §1373), it is a violation of federal law for any state or local government to “prohibit, or in any way restrict” law enforcement or other government officials from sending or receiving information from the federal government on the “citizenship or immigration status, lawful or unlawful, of any individual.”

Instead of comforting the bereaved Steinle family in the wake of this terrible tragedy, President Obama has sought to shift the blame for this incident.

In a statement, White House press secretary Josh Earnest blamed Republican lawmakers for Kate Steinle’s death. “It’s because of the political efforts of Republicans that we have not been able to make the kind of investment that we would like to make in securing our border and keeping our communities safe,” he said.

However, it is the Obama administration that announced in 2010 that it would not sue sanctuary cities that refuse to cooperate with the federal government on immigration enforcement.

It was the Obama administration that axed a program that made it easier for immigration authorities to find and deport illegal immigrants who had committed local crimes.

Under the Secure Communities program, local jurisdictions had the ability to check whether individuals they arrested were illegally in the U.S. or were “otherwise removable due to a criminal conviction.” If an individual was found to be illegally present, “ICE [would take] enforcement action—prioritizing the removal of individuals who present the most significant threats to public safety.”

But in 2014, the Obama administration got rid of the Secure Communities program, making the bizarre claim that the program’s “very name ha[d] become a symbol for general hostility toward the enforcement of [the nation’s] immigration laws.”

It put in a new, much more limited program, the Priority Enforcement Program (PEP), which only allows ICE to ask local jurisdictions for “voluntary” notification or detainment.

Under the Priority Enforcement Program, ICE has much narrower enforcement priorities and reasons for removing an illegal alien.

In fact, ICE’s enforcement priorities are so narrow today that it has released tens of thousands of dangerous, violent, criminal aliens, from murderers and drug dealers, to kidnappers and robbers, onto the streets—almost 70,000 in just the past two years.

Yet, even with this weakened standard, ICE still issued a detainer for Francisco Lopez-Sanchez, recognizing that he posed a threat to public safety if he remained in the United States.

San Francisco disregarded that detainer, washing its hands of a seven-time felon, and releasing him into an unsuspecting populace.

It seems San Francisco and other sanctuary cities are more concerned with protecting illegal aliens, even those with criminal records, than with protecting innocent citizens like Kate Steinle or Tony, Michael, and Matthew Bologna.