Majority of Greek Voters Rejected Reasonable Offer to Let Them Stay in Eurozone. What’s Next. 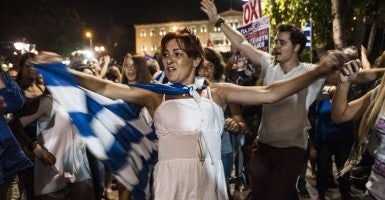 On Sunday Greek voters, following the lead of hard-left Prime Minister Alexis Tsipras, overwhelmingly rejected an offer from the so called “Troika” of creditors, consisting of the International Monetary Fund, the European Central Bank and the European Commission.

The Troika offered additional funding to Greece in exchange for much needed reforms including cuts in public sector wages, pensions, and other domestic spending.

Tsipras promised Greek voters that a “No” vote against “austerity” would strengthen his hand and get them another, better bailout. Apparently the majority of them believed him.

Now the world will see if he was right. Many Greeks are cheering Tsipras today for his populist stance against the Troika but, as The New York Times reports, “that could fade quickly if he leads the country deeper into bankruptcy and financial chaos, creating a new round of instability with consequences for Greece and the broader European project.”

Mixed signals from various eurozone capitals make it difficult to predict the outcome of a crucial summit meeting to be held tomorrow in Brussels.

Others, such as German Finance Minister Wolfgang Schäuble, are concerned that a third bailout for Greece in five years would send the wrong signal to voters in other heavily indebted eurozone countries like Italy, Spain, and Portugal).

Schäuble wants the eurozone to hold fast, which could set in motion the long-threatened “Grexit” of Greece from the eurozone.

No one doubts that Grexit would be extremely painful financially, at least in the short-to-medium term.

Writing in the Daily Telegraph, Ambrose Evans-Pritchard said for the Greek government Grexit will require “seizing direct control of the Greek banking system, a restoration of sovereign monetary instruments, Grexit, and a return to the drachma—if the ECB maintains its liquidity blockade, forcing the country to its knees” and quotes fears by former Greek Finance Minister Yanis Varoufakis (who resigned today):

… that Greece did not have the technical competence to carry out an orderly exit from EMU, and truth be told, Syriza has already raided every possible source of funds within the reach of the Greek state—bar a secret stash still at the central bank, controlled by Syriza’s political foes—and therefore has no emergency reserves to prevent the crisis spinning out of control in the first traumatic weeks.

He was putting out feelers for technical experts in London, targeting veterans of Britain’s ERM exit in 1992, though he was under no illusions that Grexit could ever be anything other than gruesome.

Europe would definitely be better off without Greece as a constant thorn in its side. As for Greece, without Europe to blame for its problems, perhaps it will finally kick out its populist and incompetent government and do the right thing: adopt a new currency, create a simplified tax system that people don’t feel obliged to evade, and abandon the crony capitalism that is strangling its economy and people.

One thing is certain.  Now that nearly two-thirds of the voters in Greece have chosen to reject the economic reform measures required by the European Union, European Central Bank and International Monetary Fund in exchange for further funding, the Greeks will be held responsible for the outcome as this crisis plays out. If they are to deal with their dire economic circumstances, Greece’s leaders must be prepared to embrace policies that advance economic freedom, rather than continue down the path of socialist ruin.