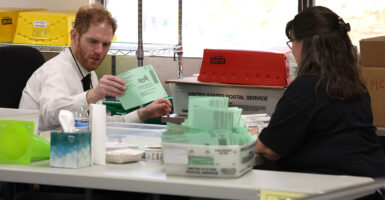 Republicans have often expressed frustration and mistrust at election results that come in days or weeks after Election Day, particularly in 2020 and 2022. Delays in both cases have enflamed accusations of fraud and suspicion that the increase in voting by mail undermines the integrity of the election system.

Respondents who did not identify themselves as Republican or Democrat also expressed doubts about America’s elections. A large chunk (42.5%) said they “strongly trust” elections, while another 19.7% said they “somewhat trust” them. More than a third (37.8%) said they either “somewhat” (17.2%) or “strongly” (20.6%) distrust them.

“Americans are distrusting results for a number of reasons,” Meckler, the Convention of States Action president, told The Daily Signal on Tuesday. “First are structural and legal reasons: long early voting, mail voting, drop boxes, electronic voting machines, etc. All these practices leave room for fraud and abuse. And we’ve seen plenty of evidence of fraud and abuse.”

“Second, for years, politicians on both sides of the aisle have been telling us that the elections are not safe, secure and valid, some for good reason, and some simply for political gain,” Meckler added. Republicans like former President Donald Trump and Democrats like Georgia governor candidate Stacey Abrams have both alleged that their elections were invalid.

“Finally, and importantly, Democrats actually say by large margins (68%) that they have more faith in elections where the count is delayed or takes weeks,” Meckler noted. “The poll suggests that election integrity reform is important nationwide, to restore basic trust in the underlying foundation of peaceful transfers of power in all electoral jurisdictions in the nation; easy, safe, secure elections with relatively rapid results.”

“I think we can trust many, if not most, of our elections, but there are elections where either people cheat or significant errors are made by election officials that question the result,” Hans von Spakovsky, co-author of “Our Broken Elections: How the Left Changed the Way You Vote,” told The Daily Signal before Election Day 2022.

While partisan bias likely impacts trust in delayed results, elections are not technically over until state officials certify them. State and local governments release unofficial results on election night, but candidates have many ways to contest the vote or to demand recounts, should they suspect fraud. In most cases, unofficial results give a reliable indication of the ultimate winner, so candidates who are likely to lose often concede long before the results are official. News outlets “call” races based on unofficial results, not certified results.

Due in part to the expansion of mail-in voting during the COVID-19 pandemic and the counting of early votes after Election Day votes, Republicans have seen early GOP leads vanish throughout and after election nights, inspiring distrust in the results.