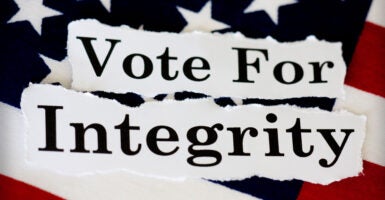 Integrity is something every American voter should want, not only in their candidates for public office, but also in their election systems. (Photo: McCaig/E+/Getty Images)

Election integrity laws of various stripes were on the ballot in states across the country on Tuesday.

Some of the ballot proposals were good, others were bad, and some were deceptive.

Most have been decided, but results on some of the ballot initiatives as of this writing—notably, in Arizona and Nevada—haven’t been decided yet.

The following is a roundup of significant election integrity initiatives that were decided by voters in the midterm elections.

In-person early voting will be allowed in Connecticut after voters in the state passed Question 1. The initiative garnered 60.4% of “yes” votes with more than 95% of the vote counted, according to The New York Times.

That doesn’t quite mean early voting is state law at this point, only that the Connecticut General Assembly can now pass laws allowing early voting to take place.

As Von Spakovsky explained, while early voting is convenient, “voters have no opportunity to change their vote if last-minute information comes out about a candidate prior to Election Day or there is a transformative debate, such as just occurred in the Pennsylvania U.S. Senate race.” The latter was a reference to the uneven debate performance of then-Democratic U.S. Senate nominee John Fetterman in an Oct. 25 debate, more than a month after early voting began on Sept. 19.

Massachusetts narrowly passed an initiative that upholds a law allowing the state to issue driver’s licenses to illegal immigrants.

Earlier this year, Massachusetts Gov. Charlie Baker vetoed legislation that allowed illegal immigrants to get driver’s licenses, but he was overridden by the legislature.

The law was approved with 54% of the vote, with 99% of ballots counted, according to Boston’s WBTS-TV Channel 10.

As Von Spakovsky noted, however, this license law has implications for election integrity in the state.

“Massachusetts is one of the irresponsible states that implemented automatic voter registration in 2018, which adds anyone getting a driver’s license to the voter rolls, no questions asked,” he wrote, meaning that it could enable noncitizens to vote.

In Michigan, Proposal 2 passed by a wide margin. It won 60% of the vote, with more than 95% of the vote counted, according to The New York Times. The law adds several voting-related policies to the state constitution.

Some of the provisions of the law weren’t straightforward. It says that voters should prove “identity with a photo ID” when they vote. However, Von Spakovsky wrote, that provision was there to “con voters into not paying attention to the rest of the proposal, which actually guts the ID provision by saying anyone can vote if they simply sign a form claiming that they are who they say they are.”

He wrote that the law “creates permanent absentee-ballot lists, guaranteeing that ballots will go to voters who are deceased or have moved out of state; authorizes unguarded, unmonitored, unsecured drop boxes; and says that only election officials can conduct audits, which would result in election officials auditing their own behavior—a clear conflict of interest.”

Nebraska voters approved Initiative 432 by 66% of the vote with 95% of the votes counted, The New York Times reported.

The law requires voters to present a photo ID to vote in the state. It passed after years of debate in Nebraska.

“Showing ID when they go to vote, it’s one of the ways we can strengthen the integrity of our elections. It’s a great opportunity for the ‘Second House,’ the people of Nebraska, to be able to weigh in a way where the Legislature has not been able to get it passed,” Gov. Pete Ricketts, a Republican, said before the election.

This isn’t the end of the line for Initiative 432, however. The state’s unique unicameral legislature now needs to iron out the specifics of the law now that it has been approved by voters.

According to KSNB-TV Channel 4, Nebraska lawmakers will hash out the details of the law in the next legislative session, which begins in January.

Ohio overwhelmingly passed Issue 2, which was an amendment to the state’s constitution that disallows noncitizens from voting.

The issue passed with 77.1% of the vote with about 95% of votes being counted, according to The Columbus Dispatch.

The amendment requires that “only a citizen of the United States, who is at least 18 years of age and who has been a legal resident and registered voter for at least 30 days, can vote at any state or local election held in this state.”

It also prohibits noncitizens from voting in local elections if they aren’t eligible to vote in statewide elections, and mandates that voters must have been registered for at least 30 days before casting a vote. As I wrote on Tuesday, the ballot initiative was triggered by a small town in western Ohio opting in 2019 to allow noncitizens to vote for local officials.

Six other states have similar laws on the books, according to WBNS-TV Channel 10—Alabama, Arizona, Colorado, Florida, Minnesota, and North Dakota.

That number has risen in just a few years—only two states had similar laws on their books as of March 2020—but that number has grown after some localities began allowing noncitizens to vote in municipal elections.

A 1996 law prevents noncitizens from voting in federal elections.