‘Our Broken Elections’: Who Broke Them and Why, and How to Fix Them 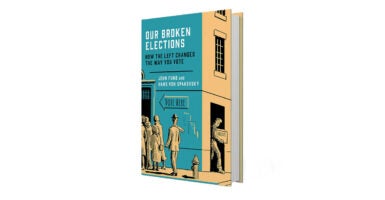 Many on the left are attempting to make election fraud easier by fighting laws that require an ID to vote, a commonsense reform overwhelmingly supported by the American public.

“Our Broken Elections: How the Left Changed the Way You Vote” by Hans von Spakovsky and John Fund (Encounter Books) is a deep dive into the issues that threaten America’s elections today and proposes remedies and solutions to fix our broken system.

The book, being released Nov. 2, can be obtained here and elsewhere. The following excerpt is from the “Introduction” to the book:

Election integrity is a fundamental requirement of a functioning democratic republic.

In the freest nation in the world, our system of government and our very liberty depend on free and fair elections. Whether selecting a mayor or the president of the United States, every American must be able to trust the process, or the democratic system itself breaks down.

When someone commits election fraud, the process is no longer fair, everyone’s vote gets diluted, and in some cases, election results are changed. Problems can arise not only from intentional misconduct by individuals trying to take advantage of the vulnerabilities in our voter-registration and election process, which is largely an honor system, but also from administrative errors made by election and other government officials.

Contrary to the claims of many on the left, election fraud is a very real problem. When the Supreme Court upheld Indiana’s voter-ID law in 2008, John Paul Stevens, the most liberal justice on the Supreme Court at the time, wrote for the 6-3 majority “flagrant examples of such fraud … have been documented throughout this Nation’s history by respected historians and journalists … that demonstrate that not only is the risk of voter fraud real, but that it could affect the outcome of a close election.”

The National Commission on Federal Election Reform, chaired by former President Jimmy Carter and former Secretary of State James Baker, similarly concluded that fraud “could affect the outcome of a close election.”

Cases of local elections getting overturned because of fraud have occurred in California, Florida, New Jersey, North Carolina, Indiana, and other states.

Although hundreds of people have been convicted in recent years, election fraud often goes undetected. And even when it’s discovered, overburdened prosecutors rarely prioritize these cases.

Fraudsters can steal votes and change election outcomes in many ways, including the following:

Unfortunately, many on the left are attempting to make election fraud easier by fighting laws that require an ID, a commonsense reform overwhelmingly supported by the American public. They’ve pushed to get noncitizens and jailed inmates to vote, and they oppose all efforts by election officials to certify the citizenship of registered voters through federal databases and other means.

And they’ve sued states that have tried to clean up their voter rolls by removing individuals who have died, moved away, or are registered multiple times in several states.

The changes that were rammed through for the 2020 “COVID” election, including switching to universal all-mail elections or dramatically increasing the use of absentee mail-in ballots, are unwise and dangerous.

Absentee ballots are the tools of choice of vote thieves because they are the only ballots cast outside the supervision of election officials and outside the observation of poll watchers, destroying the transparency of the election process that is a fundamental hallmark of a healthy democracy.

Absentee or mail-in ballots also have a much higher rejection rate than votes cast in a polling place since there are no election officials present in someone’s home to answer questions or resolve any problems a voter may be having.

When you add the problems of missed delivery, delayed delivery, and other errors made by the Postal Service, it seems obvious that mail-in ballots are not a good alternative to voting in person.

Preserving this great experiment that is America depends on having free and fair elections, where all Americans can trust the process and the results.

Something as critical as election integrity can’t be left to a simple honor system or the delivery of ballots by unknown third parties. One of the most important roles of government is to safeguard the electoral process and ensure that every voter’s right to cast a ballot is protected and not diluted by fraud or administrative errors.

There are two fundamental civil rights when it comes to voting. First, the right not to be intimidated, blocked, or otherwise prevented from voting. We fought a great struggle to pass a voting rights bill in the 1960s to end discriminatory state laws. We have to preserve those gains and build on them.

Second, everyone also has the right not to have their vote canceled out by someone who shouldn’t be voting, whether that person is dead, has moved out of state, is a noncitizen, is under age, hasn’t paid his or her full debt to society after imprisonment, or doesn’t even exist.

Protecting both rights is how we safeguard the future of our republic.