Mike Huckabee in Iowa: ‘Religious Liberty Is the Foundation of All Our Liberties’ 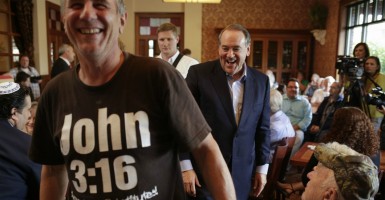 FORT DODGE, Iowa—Former Arkansas Gov. Mike Huckabee—who won Iowa’s Republican caucuses in 2008—joined a room full of Iowans this morning to lay out the policies he would promote during his latest presidential run.

Huckabee, who especially succeeded in winning over evangelicals in 2008, focused much of his speech on religious liberty, which he called “the foundation of all our liberties.”

He questioned the Supreme Court’s decision to legalize gay marriage.

Huckabee said the Supreme Court, or “the extreme court” as he calls it, decided “that 5,000 years of human history in regards to what marriage meant didn’t matter anymore.”

“The Supreme Court [voted] away the common sense and the common understanding of the family,” Huckabee said.

According to Huckabee, the gay marriage ruling shows “how quickly we have spiraled out of control.”

But, he said, “every human being ought to be treated with dignity and respect.”

Huckabee proposed broad protections for religious liberty if he were elected president.

While Huckabee crafted his message around religious liberty, he said the economy and military are the wings that help propel the country forward.