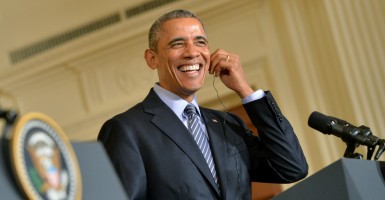 On Wednesday, President Obama announced that the U.S. and Cuba have reached an agreement on reestablishing diplomatic relations.

As part of his normalization bid with the Castro regime, the president has granted the dictatorship another in a series of dangerous concessions. But after Obama’s statement today, there are many questions that have yet to be answered.

Throughout the past 18 months of clandestine negotiations and 6 months of semi-public talks, the Cuban negotiators have consistently raised many obstacles to the president’s much wanted embassy.

Cuban officials made it clear that the regime will not change its political or economic system, despite the Obama administration’s many overtures. The regime also demanded an end to the embargo and removal of Cuba from the U.S. list of state sponsors of terrorism before restoration of diplomatic relations.

Later in January at a summit of Latin American countries, Cuban leader Raul Castro reiterated these points, conditioning further openings with the U.S. on the lifting of the U.S. embargo, the return of Guantánamo Bay naval base, and compensation for “human and economic damage” incurred as a result of the U.S. embargo.

So far, Obama has given Havana three convicted spies accused of killing Americans, drastically eased sanctions, lobbied Congress to lift the embargo and removed Cuba from the state sponsors of terrorism list.

In light of that, the Obama administration must answer these questions:

1. Did the U.S. receive compensation for the $8 billion in U.S. assets unlawfully seized by the Cuban government?

According to the Cuban Liberty and Democratic Solidarity Act (LIBERTAD), which was passed in 1996, reestablishing diplomatic relations cannot happen until: first, the Cuban government compensates American citizens for illegally confiscating their property  valued at $8 billion, the largest seizure of U.S. assets in history, and second, “when the president determines that there exists a democratically elected government in Cuba.”

It is safe to assume that Havana has not met either requirement. Cuban leader Raul Castro has gone so far as saying that before an embassy can be opened, the U.S. must provide reparations for the damages of the embargo.

2. Has the U.S. agreed to the Cuban government’s demands of restricted diplomatic travel?

It is no secret that Cuba is a police state and that extends to Americans as well. U.S. diplomats in the Interest Section are kept from privately meeting with human rights activists and even persecuted members of the religious community.

If so, this defeats the purpose of an embassy,  as routine diplomatic activities are impossible.

3. Will the Cuban government continue to search diplomatic pouches?

Cuban officials have consistently demanded that they be able to inspect diplomatic pouches. Like the Cuba policy website Capitol Hill Cubans has stated, this is a clear violation of diplomatic protocol, against the Vienna Convention on Diplomatic Relations and completely unprecedented in the Western Hemisphere.

4. Did the U.S. make any concessions on Guantanamo Bay?

Both Fidel and Raul Castro have long rallied to shut down the U.S.’s naval base presence in Guantanamo Bay. It is another area where the regime and Obama see eye to eye: The president too has long supported closing it down. Were any backroom deals made?

5. Will the U.S. continue its support for Cuba’s democratic opposition and human rights activists?

The Cuban government strongly opposes Washington’s support for dissidents and has raised it as an obstacle to the president’s much-wanted embassy in Havana. Cuban officials urged the U.S. not only to stop funding of independent groups, but also to mandate the Cuban government’s role in selecting Communist Party approved organizations to receive U.S. funding.

It has always been the U.S.’s position to support a democratic transition on the island. It seems to no longer be the case.

Obama has made a complete reversal: We are now engaging and financing the Cuban regime and isolating the Cuban people. The president cannot allow his self-serving legacy policy to be at the cost of democracy in Cuba.