Marco Rubio on How to Reform the VA 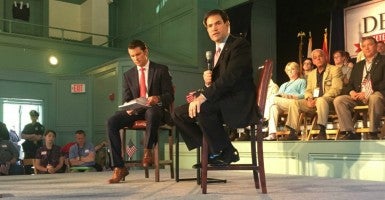 EXETER, N.H.—Sen. Marco Rubio, R-Fla., said that veterans should be able to choose between receiving care at a Veterans Affairs facility or from a private provider during a town hall hosted by Concerned Veterans for America in New Hampshire yesterday.

Pete Hegseth, the CEO of Concerned Veterans for America, introduced Rubio and praised his efforts towards working to improve the Department of Veterans Affairs.

Rubio said that veterans seeking care shouldn’t have to go through a “hassle,” and that making care accessible for them at both VA facilities and private providers would expedite their care.

Rubio said that his brother, who was born in Cuba, served in the United States Army.

“He didn’t want my mom to worry, so he told her he was an accountant in the Army,” Rubio said. “Until my father noticed that accountants don’t jump out of airplanes.”

His brother’s VA claim is one of the cases handled by Rubio’s office.

“Every single day in my office, literally we have eight offices across the state of Florida, the number one or number two constituent case work that we have in any given office is a VA claim,” Rubio said. “And that calls into question a fundamental tenant of the obligation we owe the men and women who’ve served us in uniform.”

Rubio said that the problems at the VA don’t stem from lack of funding.

“This is not a funding problem,” Rubio said. “It doesn’t matter how much money you pour into a broken model that no longer is responsive to 21st century needs of 21st century veterans.”

Rubio said that veterans, and all patients, deserve to make their own choices about their health care.

He stressed that many at the “ground level” in the VA, such as nurses and doctors, are dedicated to serving veterans, but that the VA system is “broken.”

“It is important for the secretary [of the VA] to be able to fire people who are not doing their job,” Rubio said. Speaking more broadly about his foreign policy, Rubio said that we must never send those in uniform into “a fair fight.”

Hegseth asked Rubio what he thought of The New York Times’ “groundbreaking” reporting on the senator’s spending habits.

“The best answer I’ve got is someone who emailed me or texted me and said that, ‘any boat where you have to go to the bathroom off the side of the boat is not a luxury speedboat,'” Rubio joked.