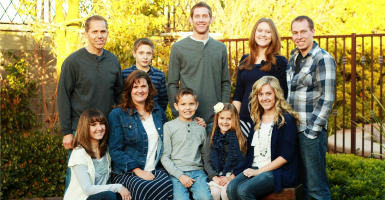 Liz Robbins speaks out about how education savings accounts will help her family of nine. (Photo: Robbins family)

Liz Robbins was caught off-guard when a Washington, D.C., area code appeared on her phone.

“I apologize,” she said. “With the surgery … I had been emotional right before you called.”

Robbins was answering the phone from Henderson, Nev., a short drive from Las Vegas. When the 202 area showed up, she thought it was the hospital calling, where her 19-year-old daughter, Amber, had just undergone a surgery.

Trying hard to hold back her emotions, Robbins politely asked to reschedule the interview about Nevada’s newly-enacted school policy giving parents control over how to spend their children’s education funds.

It was too much for this particular Friday, which was more normal than Robbins might like to admit.

But before hanging up, Robbins began explaining the reason why her daughter was undergoing surgery (due to complications related to Ehler-Danlos syndrome, which is an incurable degenerative condition that affects the joints and skin).

In the middle of discussing the disease, Robbins paused.

“Let’s do the interview now,” she said. “This is important.”

Instead of spending the next 30 minutes helping one daughter cope with surgery and another prepare for her wedding that was taking place the next day, Robbins spent them talking to a Washington, D.C., reporter about why her family desperately needed access to an alternative education option called education savings accounts.

And now, thanks to a bill passed by Nevada state legislators earlier this June, they did.

The Robbins’ describe themselves as an “unusual” family. (Photo: Robbins family)

Education Savings Accounts and Their Impact

Education savings accounts are an outgrowth of the school choice movement that, by literally giving parents an “education debit card,” allows them to craft a customized education plan to meet their children’s specific needs.

By giving her access to state education funds that would have otherwise been spent in their assigned public school, parents with children enrolled in Nevada public schools can spend money on tuition and fees at an approved private school, tutoring services, textbooks, and so forth.

For Robbins and her seven children, who range in ages from 8 to 26, the program will be life-changing.

“If you have a health challenge but you’re still a college-bound student, there are no options for you in our district,” Robbins said. “You are just on your own.”

Two of Robbins’ daughters are affected by the inherited connective tissue disorder. Because of extensive surgeries, medical tests and debilitating symptoms, they’ve missed entire years of school at a time.

“Children with health problems … they are forgotten in the school districts,” Robbins said.

Amber is now taking college courses online and was still able to graduate a valedictorian and receive a five—the highest score possible—on her AP government/law exam, despite the challenges she faced.

“She has a medical condition but she is still a bright, articulate student,” Robbins said.

While teachers worked with Amber to turn in assignments remotely, Robbins said her daughter did not receive “one day of tutoring” while she was out her senior year.

“That is a tragedy,” Robins said.

With education savings accounts, Robbins will now have a whole host of education opportunities available to her youngest children, who are also at risk for developing the condition as their bodies develop.

Nevada’s education savings account differs from those set up in Arizona, Florida, Mississippi and Tennessee, all of which have stringent requirements for the type of students who are eligible. In Nevada, the only requirement is that students must be enrolled in the public school system for at least 100 days.

If everything goes according to plan, parents will be able to access the accounts at the beginning of next year.

“And that education revolution is going to force the public school system to begin to modify itself.”

Rallying Against the Revolution

Robbin’s inkling towards an “education revolution” is precisely what has many organizations and teachers unions rallying against it.

Many traditional advocates of public education fear that education savings accounts will strip public schools of already limited funding, and legitimize whatever curriculum a parent wants—say, a Biblical teaching that runs contrary to the public school curriculum—at the taxpayer’s expense.

This year, 230,000 students were eligible, and only 1,300 participated. But since its inception, the program has become so popular that eligibility was expanded four times to include children entering kindergarten, with special needs, from underperforming schools, from active-duty military families, in foster care, of fallen soldiers and from tribal lands.

Organizations like the American Federation of Teachers and the Nevada State Education Association, which is a union of more than 3 million teachers in the state, argue the program is “dangerous” and could devastate traditional public schools.

Neither organization responded to The Daily Signal’s request for an interview, but in a statement to Politico, Randi Weingarten, president of the American Federation of Teachers, said earlier this year that education savings accounts create an “unregulated, unaccountable market.”

“Instead of the exit strategy from public education that these programs represent, we need a renewed commitment to strong neighborhood public schools for every child,” she said. School choice advocates believe the introduction of education savings accounts will create competition, which will better education for all students, including those who remain in public schools.

“By allowing all students to attend private school, Nevada has introduced an element of competition into its public school system,” said Chantal Lovell, communications director for the Nevada Policy Research Institute, which supports the school choice initiative. Lovell added:

In the coming years, we should see all schools in Nevada—public and private—improve as they compete for students and the dollars that now follow them. It’s a phenomenon similar to what we see when a new restaurant opens in a community that previously had very limited and mediocre dining options.

Every year since 1994, Robbins has had at least one child enrolled in Dooley Elementary, which is located in one of the largest school districts in the country. In 2014, the K-12 school was named a Blue Ribbon School. This award is given by the U.S. Department of Education to schools for their academic excellence or progress in closing achievement gaps among students.

Despite having the privilege of being able to send her children to a nationally recognized school, the “cookie cutter design,” Robbins said, isn’t cutting it.

“We’re unusual,” she said. “Lots of children have different ways of learning and we need to be able to find ways to bring out the best in every child. And at a large school system that’s a cookie cutter design does not do that.”