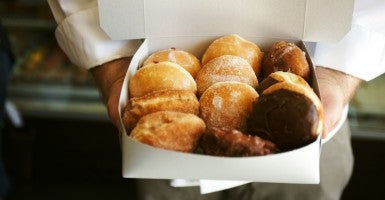 In November 2013, the FDA published a tentative determination that partially hydrogenated oils, the primary dietary source of trans fat in processed food, are not “generally recognized as safe.” The agency has now decided to finalize this determination.

But the FDA has still failed to properly address why such an extreme action was necessary when trans fat consumption was already drastically coming down on its own. As the FDA acknowledges, “In the United States, consumption of trans fat from products containing partially hydrogenated oils has declined dramatically from 4.6 grams per day in 2003 to about 1 gram per day in 2012.”

This is about an 80 percent reduction. Yet, the FDA still felt the need to effectively ban artificial trans fat.

The FDA’s decision is also problematic because the FDA shouldn’t use its  power to go after “unhealthy” ingredients; its focus is supposed to be on “unsafe” ingredients.

The agency is seeking to be the nation’s nutritionist. But that’s not the appropriate role for the FDA.

People can make voluntary and informed decisions regarding what food they choose to eat. Sometimes those decisions aren’t going to be consistent with the bureaucrats’ views on what people should eat. In fact, those choices may be fairly obviously “unhealthy” from a nutritional perspective.

However, this is a choice for individuals to make, not government officials.

The very idea that the government even knows what people should eat is absurd. This is the same federal government whose 1992 food pyramid, for example, promoted consumption of complex carbohydrates and criticized all fats.

Leading experts have heavily criticized the pyramid’s recommendations. Walter C. Willett and Meir J. Stampfer, both professors at the Harvard School of Public Health, pointed out in regards to the 1992 pyramid:

The government is fortunate when it can get nutritional advice right. This hasn’t stopped the FDA from thinking it should eliminate an ingredient out of the food supply.

Ironically, the current use of trans fat was a response to previous efforts to demonize saturated fats by some activist groups (saturated fats are not nearly the problem some had argued). Going after specific ingredients is misguided because knowledge of the ingredients is constantly changing and the alternatives may even be worse.

Trans fat has an impact on food quality such as taste, texture and shelf life. For companies that are able to find a substitute for trans fat, there could be a negative effect on these factors. Products ranging from microwave popcorn to coffee creamers could be affected, for example. Other products may be eliminated altogether.

The FDA is acting more like a nutritional advocate than a thoughtful agency charged with protecting the safety of ingredients in the food supply. The agency apparently thinks it has so much time and resources that it can try and go beyond its mission and serve as the food police. Congress needs to get the agency back on track because the FDA isn’t going to do so on its own.