Michigan Bill Would Add to Regulations on Homeschooling 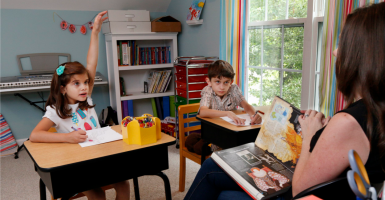 Legislation has been introduced in the Michigan Legislature that would enact stricter regulations on homeschooling in the state.

The legislation follows the deaths of two Detroit children whose mother explained their absence from a traditional school by claiming they were being homeschooled.

Michigan’s House Bill No. 4498 would require homeschooled students to meet in person twice a year with a “physician, licensed social worker, physician’s assistant, individual employed in a professional capacity in any office of the friend of the court, school counselor or teacher, audiologist, psychologist, law enforcement officer, marriage and family therapist, member of the clergy, or regulated child care provider.”

Parents or legal guardians who educate their children at home would be required to provide a record of the meetings, including “signed documentation from the individual meeting with the child.”

“We all failed Stoni and Stephen because Michigan does not maintain a list of homeschooled children, and so we have no way to identify and then protect any child who could be at risk for abuse,” Chang said in a statement. “Most homeschool parents have their child’s best interest in mind, and many do a fine job homeschooling, but with Stephen and Stoni, that wasn’t the case. Michigan can and must do better to ensure that every child is accounted for and not leave anyone behind. My bill could help prevent future tragedies like that of the Blair family.”

In March, the bodies of Stoni Blair and Stephen Berry were found in a freezer when authorities evicted their mother from her Detroit apartment. Authorities have said the children were dead for several years.

Their mother, Mitchelle Blair, 35, has been charged with their deaths. Blair explained their absence from school by saying she had decided to homeschool the children. Mitchelle Blair is accused of killing two of her kids and keeping them in a freezer. She claimed her children were homeschooled. (Photo: Newscom)

Audrey Spalding, the director of education policy at The Mackinac Center for Public Policy, wrote in an op-ed that homeschooling laws are not to blame for the tragedy.

Spalding writes that it is “understandable that legislators would want to do something in response to a parent torturing and killing her children,” but that “Increasing the regulations on homeschooling families, sadly, will not prevent these types of atrocities.”

Spalding told The Daily Signal the bill places an “additional burden” on homeschooling.

She said the language in the bill is vague and doesn’t specify what sort of “record” must be kept of the meetings.

Spalding said children enrolled in public schools see school administrators on a daily basis and thus “meet that requirement every day,” and yet still may be victims of abuse.

She added that Child Protective Services “failed to fully investigate” the Blair case.

The Detroit Free Press reports that Eric Fredlund, Stoni Blair’s former teacher, did report his concerns about her well-being to Child Protective Services after her extensive absence from school.

According to the Home School Legal Defense Association, Michigan is one of 11 states that does not require parents to notify the state they will be homeschooling their children. Under current Michigan law, parents report homeschooled children to their local school district on a voluntary basis.

According to the Home School Legal Defense Association, 15 states require only that homeschooling parents notify the state; many others require items such as test scores and student progress be reported. Some states require further evaluation such as home visits.