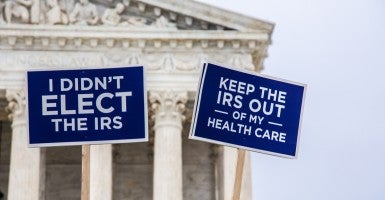 By the end of June, the Supreme Court is expected to issue its decision in King v. Burwell, the case that centers on whether the Obama administration overstepped its authority when it ordered the Internal Revenue Service to permit payment of Affordable Care Act subsidies to individuals enrolled in the federal exchange.

Should the Court rule against the administration, subsidies no longer would be available to individuals who purchased coverage through HealthCare.gov, the federal website, in the 34 states that chose not to establish their own state-based exchanges. It also would mean the Obamacare employer mandate would be effectively unenforceable and more individuals would qualify for an “affordability” exemption from the law’s individual mandate to buy insurance.

As Congress works to respond to the possible ruling, we must remember the subsidies were intended, in part, to mask the fact the law made health insurance more expensive. Consequently, any congressional response should start by exempting individuals, employers and insurance plans in states without state-run exchanges from the regulations and mandates that increased health insurance premiums to start with.

A recent poll found broad public support for this approach. The survey asked respondents the extent to which they agreed or disagreed with each of several different statements about what Congress should do in response to the Court’s decision.

The recommendation that registered the highest level of support—73 percent of the voters surveyed—was the idea that “Congress should remove Obamacare’s mandates and regulations that increase the cost of health care and disrupted health care coverage for millions of Americans in the first place.” A recent study from The Heritage Foundation quantifying the effects of those policy changes found that removing the most costly Obamacare insurance regulations could reduce premiums for the lowest-cost plans by 44 percent for young adults and even 7 percent for pre-retirees. Moreover, lower premiums not only would benefit those who might lose their subsidy but also millions of additional Americans whose coverage was made more expensive by the law’s regulations but did not receive any offsetting subsidy.

Indeed, in 2014, in the 34 states without their own exchanges, nearly 21 million Americans with individual or small employer group coverage were subject to the law’s costly new regulation, but only about 4.5 million of them qualified for a subsidy to offset those higher premiums.

Any response to a ruling against the administration in King v. Burwell should focus first on removing the Affordable Care Act’s benefit mandates and regulations that have driven up the costs of coverage for millions of Americans.

Congress will find that to start with making coverage more affordable not only will be popular but will reduce both the number of individuals who still need assistance buying coverage and the amount of that assistance. That would be a win-win-win.