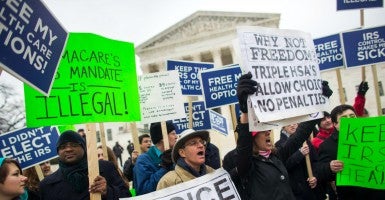 How should Congress respond when the Supreme Court hands down its decision in King v. Burwell?

At issue in the case is the Obama administration’s regulatory interpretation of the statute governing payment of the Affordable Care Act’s health insurance subsidies.

If the Court rules against the administration then those subsidies cannot be paid to individuals who obtained coverage thorough HealthCare.gov—the federally run exchange for the 34 states that have not established their own state-based exchanges.

The legal dispute centers on who is eligible for subsidies, but a court ruling against the administration will create a huge opportunity for Congress to address some of the Affordable Care Act’s underlying design flaws that increased the need for subsidies in the first place.

What the administration continues to try to hide, but which most Americans now recognize is that the Affordable Care Act imposed new regulations that made health insurance more expensive.

The law’s subsidies were intended, in part, to mask those effects. Good health care policy, by contrast, would have focused on finding ways to make coverage less expensive.

In our latest paper we calculate that removing the Affordable Care Act’s three most costly insurance requirements (the age rating restrictions, benefit mandates and minimum actuarial value requirements) could reduce premiums for the least expensive plans by as much as 44 percent for younger adults (the group most likely to be uninsured) and about 7 percent for pre-retirement age adults.

That would be a good first step toward a post-Obamacare market in which more affordable coverage reduces the number of individuals who might need assistance, as well as the size and scope of such assistance.

Even better, it would also provide relief to a much larger group of Americans whose coverage was made more expensive by the Affordable Care Act, but who do not qualify for subsidies under even the administration’s interpretation of the law.

The following table shows—in the states that would be affected by the Court’s ruling in the King case—the total number of individuals subject to the Affordable Care Act’s costly insurance requirements who would benefit from these reforms.

In the event that the Supreme Court disallows the payment of subsidies through the federal HealthCare.gov exchange, the first part of any congressional response should be to exempt individuals, employers and insurance plans in states without state-run exchanges from the Affordable Care Act’s regulations and mandates that increased health insurance premiums to start with.