We’re Paying More Than Ever for Government to Regulate Us 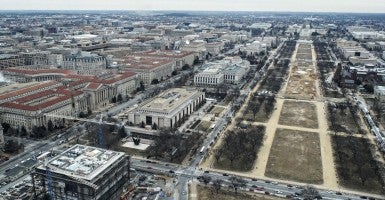 Looking east from the top of the Washington Monument, Federal Triangle is on the left, Smithsonian Buildings to their right, the mall ending at the Capitol Building in the distance. (Photo: George T/Flickr/CC BY-NC-ND 2.0)

Sen. Ron Johnson, R-Wis., claims Americans are suffering from Stockholm syndrome, a condition in which hostages begin to have misplaced positive feelings toward their captors. The captors in this case are the federal regulators who impose some 2,400 new regulations each year, and the senator suggests Americans are not sufficiently wary of their resulting ill effects.

According to a recent report by economists Susan Dudley and Melinda Warren, the cost to taxpayers of writing and enforcing all this red tape is expected to top $62 billion in 2015, about 4.3 percent above 2014 levels. On top of this, the president has asked for a further increase of 5.3 percent for regulatory agencies in 2016. Since 2000, the budgets for these agencies have increased more than 75 percent. This is in addition to the broader economic costs of red tape.

The joint report finds total staff levels within regulatory agencies has increased almost every year since 2001 and now tops 280,000.

“Regulators Budget,” published by the George Washington University Regulatory Studies Center and the Weidenbaum Center on the Economy, Government, and Public Policy at Washington University in St. Louis, has tracked the total staffing and spending of federal regulatory agencies since 1977. The growth in spending on regulatory agencies is consistent with the growing level of new major regulations reported by The Heritage Foundation and the Government Accountability Office. All signs point to more expensive regulations in the future, with more rules to be written. Growth is generally a goal of companies in the private sector, but federal regulators also aim to grow their power and influence over the private sector. Unlike growth in private-sector companies, which leads to the development of innovative products or services and the creation of new jobs, the growth of regulatory agencies often leads only to more red tape.

If the American workforce could be set free of the unnecessary and costly regulation that invades everyday life, then economic growth—the good growth we want in the private sector—would be unleashed. First, though, we need to realize we are captive to regulators and ensure we don’t prove Johnson correct.