Why US Must Defend Human Rights Across the World 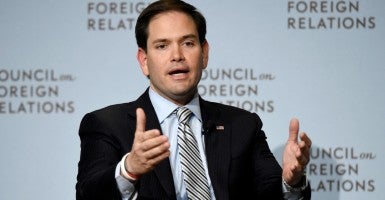 Two little-known bills in Congress—one on world press freedom, the other on Hong Kong—seek to reassert the idea that a moral defense of human rights overseas is in U.S. national interests. It’s a concept worthy of a full airing over the next 18 months as candidates of both parties seek the presidency.

One of the bills is sponsored by Sen. Marco Rubio, R-Fla., who spoke vehemently in a major speech recently about the need for “America’s moral clarity.”

On the other side stands the Obama doctrine that supporting freedom cannot get in the way of other priorities. It was enunciated in Hillary Clinton’s maiden trip abroad as secretary of state, when she declared in Beijing that the new administration would raise human rights only up to a point.

“We have to continue to press them,” she said in February 2009. “But our pressing on those issues can’t interfere with the global economic crisis, the global climate change crisis and the security crises. We have to have a dialogue that leads to an understanding and cooperation on each of those.”

The New York Times reported the next day that Clinton’s comments “drew immediate negative reaction from human rights advocates.” Among those labelling the administration’s approach as misguided was the editorial page of The Washington Post, which urged Clinton to change course.

From China to Russia, through Burma, Iran and Cuba, however, neglect of dissidents became the hallmark of the Obama administration as it pushed its goal of rapprochement with unsavory regional powerhouses like Russia, China, Iran and Brazil.

When thousands of Iranians took to the streets to demand change, the administration kept its distance. Cuban dissidents, too, became roadkill back in December.

Now along comes Rep. Chris Smith, R-N.J., with his World Press Freedom Protection Act. It calls for a series of retaliatory measures against “China, Vietnam, Saudi Arabia, and other countries rated ‘Not Free’ by Freedom House’s annual ‘Freedom of the Press’ survey.” It does so, moreover, for hardnosed reasons of national interest:

Given the critical importance of the press freedoms and the free flow of cross-border information for diplomatic, political, and financial relations globally, and for purposes of investors, businesses, and politicians making informed decisions, it should be the policy of the United States government to respond strongly and persuasively to the growing number of restrictions, threats, detentions, harassment, arrests, pervasive surveillance, killings, and delays or denials of visas faced by foreign journalists and their domestic employees, especially the blockage and censorship of the websites of news corporations.

The legislation authorizes the president to deny entry to foreign persons who have threatened press freedoms, restricts the activities of executives of state-owned media groups from countries where American journalists are harassed; and calls on the U.S. government to include press freedoms in treaty negotiations and trade agreements.

Over in the Senate, Rubio is getting ready to introduce the Hong Kong Human Rights and Democracy Act. It would require the president to certify that Hong Kong is indeed autonomous before exempting it from any new law or agreement applicable to the People’s Republic of China. It also reinstates the State Department’s annual reports on Hong Kong, which lapsed in 2007 on a parliamentary technicality.

The aim of the bill became unmistakable when Rubio explained back in November that “The U.S. should make clear that we stand on the side of the democratic aspirations of the people of Hong Kong and against attempts to suppress their voices.”

In this week’s speech to the Council on Foreign Affairs, in New York, Rubio also made clear that support for democracy was essential. One of “the three pillars” of the “Rubio Doctrine,” he said, is the articulation of America’s core values worldwide. “As president, I will support the spread of economic and political freedom,” Rubio said.

A rich national conversation over which approach to follow would be beneficial, in the primaries or the national election.