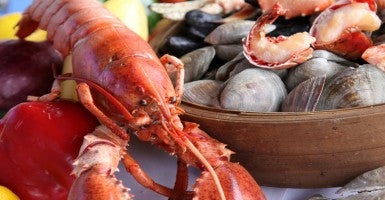 Wisconsin’s State Assembly approved legislation last week that puts in place new rules about what recipients of food stamps may purchase with the benefits.

Assembly Bill 177 would limit the types of food that could be purchased with Wisconsin’s food stamp program, FoodShare.

In addition to banning the purchase of foods such as lobster with the publicly-funded program, the legislation would also require that just over two-thirds of the benefits be used to purchase healthy foods:

“Under this bill, DHS [Department of Health Services] must require that not less than 67 percent of the SNAP benefits used by a recipient in a month be used to purchase any of the following foods: foods that are on the list of foods authorized for the federal special supplemental nutrition program for women, infants, and children (WIC foods); beef; pork; chicken; fish; fresh produce; and fresh, frozen, and canned white potatoes. In addition, DHS must prohibit using SNAP benefits for the purchase of crab, lobster, shrimp, or any other shellfish.”

Supporters say the measure is fiscally responsible and encourages healthy eating, while opponents say that limiting the types of food that can be purchased places additional hardship on those receiving aid.

“A lot of people, an awful lot of people who are on FoodShare are also on BadgerCare, so there is a direct financial benefit not just to the individual, which of course is obvious to have better health, but also to state taxpayers and society as a whole,” Rep. Robin Vos, R-Rochester, told the Associated Press.

“It’s a restriction that’s designed just to make the lives of those that are already struggling that much harder,” Rep. Lisa Subeck, D-Madison, told The Capital Times. “And instead, we should be focusing not on the foods people buy but on putting people to work by creating jobs that get people off of FoodShare.”

Rachel Sheffield, a policy analyst for The Heritage Foundation’s DeVos Center for Religion and Civil Society, said that the “food stamps program is in serious need of reform.”

“Most importantly food stamps should include a work requirement that requires able-bodied adults to work, prepare for work or look for work in exchange for receiving assistance,” said Sheffield.

The bill will go on to the state Senate for approval. The AP reports that the Wisconsin Senate declined to take up a similar bill last year.