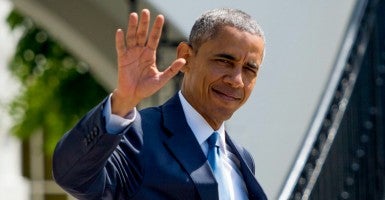 The Department of Homeland Security’s inspector general, John Roth, has dealt a serious blow against the Obama administration’s defense in the lawsuit filed by 26 states against the immigration amnesty plan announced by President Barack Obama on Nov. 20, 2014.

That plan is currently on hold due to a preliminary injunction order issued by Federal District Court Judge Andrew Hanen, an order now being appealed to the 5th Circuit Court of Appeals by the administration.

The crux of the defense asserted by Justice Department lawyers in multiple briefs filed in the litigation is that the president’s actions in this regard are simply an exercise of traditional prosecutorial discretion by executive branch officials.

For example, in its opposition to the motion by the plaintiff states for a preliminary injunction, the Justice Department claimed that exercising prosecutorial discretion by deferring action on millions of illegal aliens allows the Department of Homeland Security to “focus limited resources on higher priority aliens.” Those “higher priority aliens” are aliens who pose “threats to national security, border security, and public safety.”

However, in a report published on May 4, Inspector General Roth says that the Department of Homeland Security “does not gather and analyze prosecutorial discretion data.” Therefore, Homeland Security does not have the ability “to fully assess its current immigration enforcement activities and to develop future policy.” Because the Department of Homeland Security is not collecting this data and “does not have a mechanism to continuously monitor its use of prosecutorial discretion,” it lacks the ability to “improve future policy.”

In fact, because the Department of Homeland Security is not actively monitoring the use of prosecutorial discretion, Roth concludes that Homeland Security may “be missing opportunities to strengthen its ability to remove aliens who pose a threat to national security and public safety.”

Even when the Department of Homeland Security knows about serious criminal violations by illegal immigrants in this country, it is still refusing to deport large numbers of them.

So the very reason that the administration is using to justify exercising prosecutorial discretion to grant what amounts to executive amnesty to millions of illegal immigrants—the ability to focus on and remove the most dangerous illegal immigrants—seems to be misleading at best and specious at worst because the Department of Homeland Security is not even collecting the information needed to adequately engage in this type of prioritization of its enforcement efforts.

Even worse, the inspector general identified another “potential issue that could affect DHS employees’ ability to make well-informed decisions when exercising prosecutorial discretion.” Homeland Security field personnel in its Immigration and Customs Enforcement division told the inspector general that they don’t always “have access to an individual’s criminal history in his or her country of origin.”

As a result, “aliens convicted of or wanted for a felony committed in their home country, but not convicted of a felony or significant misdemeanor in the United States may not be identified as a DHS enforcement priority” (emphasis added).

This finding by the inspector general comes on top of the fact that even when the Department of Homeland Security knows about serious criminal violations by illegal immigrants in this country, it is still refusing to deport large numbers of them.

According to information released by the U.S. House Judiciary Committee at an oversight hearing of Immigration and Customs Enforcement held on April 14, 2015, ICE let loose on the American public 36,000 convicted criminal aliens in fiscal year 2013 and 30,558 in fiscal year 2014.

These aliens were “convicted of offenses involving dangerous drugs, assault and domestic violence, stolen vehicles, robbery, sex offenses, sexual assault, kidnapping, voluntary manslaughter, and even homicide.” In fact, “27 percent of the aliens released were so called ‘level 1s’ according to the administration—the worst of the worst.”

All of this data appears to contradict the administration’s argument that it is exercising prosecutorial discretion in order to prioritize the removal of aliens who are a danger to public safety.

Not only is it not collecting the data needed to properly exercise prosecutorial discretion, but it is releasing tens of thousands of dangerous aliens with full knowledge of their criminal convictions and criminal history. That is prosecutorial indiscretion of the worst kind.

The report of the inspector general is certainly relevant to the issues now being considered by the 5th Circuit Court of Appeals, which is reviewing whether the injunction issued by district court Judge Hanen was both legally and factually justified. Although the report was issued after Judge Hanen held a hearing on the case, issued his injunction, and the case was appealed to the 5th Circuit, it can still be brought to the attention of the appellate court.

Under Federal Rule of Appellate Procedure 28(j), a party to a case (such as the 26 states in this litigation) can file a letter with the clerk of the 5th Circuit advising the court of new “pertinent and significant authorities” that have come to a party’s attention after the party’s brief has been filed.

I would be very surprised if the Texas solicitor general, who is arguing the case on behalf of the states, does not file a 28(j) letter apprising the 5th Circuit of the May 4 inspector general report. There is little doubt that report tends to undercut the strength of the government’s argument.