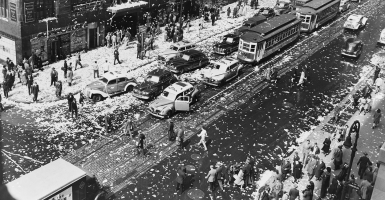 The day, formally now referred to as “Victory in Europe Day” or “V-E Day,” marks the acceptance of Nazi Germany’s surrender to the Allies of World War II. Today, we join with countries across the world in celebration of victory. We honor the men and women who served and the innocent people who lost their lives to Adolf Hitler’s regime.

These pictures take a look back at the special moments of relief, pride and joy around the world, 70 years ago. Excited and proud crowds in Parliament Street cheer for the end of the war in 1945. (Photo: Leonard Bentley/CC by 2.0) People receive leaflets of the the German instrument of surrender in Berlin. (Photo: TASS/Valery Faminsky/Newscom)

People flood the streets of London and celebrate the Piccadilly Circus. (Photo: Ronny Jaques/BiblioArchives/ LibraryArchives/CC BY 2.0) A bus conductor celebrates the end of the war in Europe in Scotland. (Photo: Newscom) This instrument of surrender was signed on May 7, 1945, at Gen. Dwight D. Eisenhower’s headquarters in Rheims by Gen. Alfred Jodl, chief of staff of the German Army. At the same time, he signed three other surrender documents, one each for Great Britain, Russia and France. (Photo: Office of War Information/Licensed under Public Domain) A Soviet officer reads the text of the German surrender. (Photo: TASS/Valery Faminsky/Newscom)