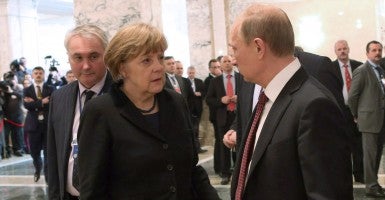 German Chancellor Angela Merkel recently negotiated a cease-fire in Ukraine with Russian President Vladimir Putin. Within days, Ukrainian troops lost the city of Debaltseve to a new Russian-backed rebel offensive. At the same time, European negotiations on the Greek financial crisis broke down in acrimony. This is the hour of Europe, and it’s a disaster.

And really, it’s the hour of Germany, the West’s crucial player. Led uncertainly by Germany, the European Union’s response to Russia’s aggression was to impose trade sanctions.

By the same token, what’s prolonging the Greek crisis is Germany’s contradictory desire to force Greece to be disciplined so Berlin gets its money back, but also to keep Greece in the euro.

The result of that policy has been to push Greece into a deep depression and put its politics in a headlock. The Greek people broke out by electing Syriza, an idiotic Marxist party which has the sole virtue of believing Greece should be governed from Athens, not Berlin.

German policy in Ukraine has been equally useless. The Germans like to whine—actually a form of bragging—about the sacrifices they have made to impose costs on Russia. This is nonsense.

German exports to Russia in 2013 were under four percent of Berlin’s total, and over the first eight months of 2014, those exports declined by less than 20 percent.

Germany’s sacrifices in cracking down on Russia—which has invaded a sovereign European nation, annexed a chunk of its territory, and shot down a civilian airplane—has cost Berlin about $8 billion, in an economy worth almost $4 trillion.

No wonder Putin thinks the Europeans are pushovers. But it’s worse than that. The point of the cease-fire wasn’t to stop the war in Ukraine. It was to stop the nascent U.S. push to arm Ukraine. As Merkel put it recently, “progress on Ukraine cannot be achieved by more weapons.”

That is more nonsense. Until Ukraine can defend itself, the Russian-backed separatists have no reason to stop fighting. Building up Ukraine’s defensive power will be a long job, but it needs to start now.

The German opposition to arming Ukraine gives Russia a veto on Ukraine’s future: Russia can always threaten to restart the war if Ukraine resists its will.

So Germany, to get its money back, has pushed Greece into an economic collapse so serious that the Greeks believe the answer is Marxism.

At the same time, Germany moans about imposing sanctions on Russia that have cost it one percent of its exports, and it refuses to respond seriously to the fact that Russia is overthrowing a European nation by force of arms.

As the German magazine Der Spiegel put it, Merkel has done “exactly what Germans expect from her: Fight for peace, search for compromise with the Russians, and resist the Americans.”

Every nerve in Germany is straining not to sanction Russia, but to give it a hug and sell it a car. And much of the rest of Europe, frighteningly, has even less backbone than Germany.

Germany is not Europe’s master. But it is Europe’s manager. That management has been disastrous. In Ukraine, people are dying to get into Europe. In Greece, they’re dying to get out of it. In both places, Germany has practiced the worst kind of checkbook diplomacy: draconian and grasping in Greece, narrow-minded and skinflint in Ukraine.

The first “hour of Europe” came during the Balkan Wars of the 1990s, when Bill Clinton’s administration wanted to arm Serbia’s opponents to give them a fighting chance on the ground. The Europeans said no: the result was genocide.

Twenty years later, Europe is fecklessly downplaying catastrophes on its doorstep, narrowly focused on its commercial interests—and concerned above [all] with stopping the Americans.