The Government Is Definitely Back in the ‘Affordable Housing’ Game 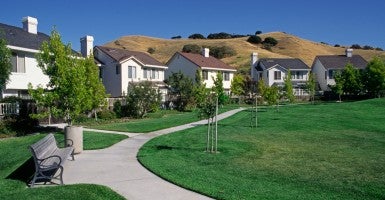 More than six years out from a government-driven housing bubble, the chief regulator at the Federal Housing Finance Agency, Mel Watt, and the Department of Housing and Urban Development secretary, Julian Castro are respectively clearing a path to expand the “credit box” for government-backed home loans.

We have been down this path before. Using the U.S. housing finance system to try to achieve political ends of broader and “affordable” housing goals ultimately undermines taxpayer safety and the opportunity to build meaningful equity for homeowners.

After all, it was only less than two decades ago that Andrew Cuomo, then-Housing secretary under the Clinton administration, announced that Fannie Mae and Freddie Mac, the two largest housing finance companies at that time, would be required to buy $2.4 trillion in mortgages over the next 10 years to provide affordable housing for about 28.1 million low- and moderate-income families.

In the same announcement, Cuomo went on to say that “this action will transform the lives of millions of families across our country by giving them new opportunities to buy homes or move into apartments with rents they can afford … it will help ease the terrible shortage of affordable housing plaguing far too many communities.”

To be fair, political leaders in both Democrat and Republican administrations have repeatedly called for arbitrary, vague goals aimed at achieving a “homeownership society” and expanding “affordable housing” even when most qualified homeowners already owned homes.

A great irony, though, is that these affordable housing initiatives have had the exact opposite of their intended impact: These programs encourage higher levels of debt, increased housing prices (and lower affordability) in many markets, and greater risk within the overall housing finance system.

Affordable housing advocates tend to focus on high rental costs and widespread slack in the first-time home purchase market as main justification for expanded government support, but establishing new government credit programs and expanding existing ones has repeatedly failed to fix these problems.

To be sure, there are numerous factors weighing on the overall housing market outlook, and certainly a main influence is the sluggish first-time purchase market. This market, in particular for younger individuals, is hampered by high levels of non-mortgage debt, weak employment and income opportunities, low labor mobility (some held back by federal mortgage modification programs), and high home prices in some metropolitan areas.

Despite any of the best stated intentions to assist individuals with “affordable rent” or “affordable mortgages,” all of this direct and indirect government interference in the housing finance system ultimately biases individuals toward certain market segments and particular types of debt instruments, increasing financial risk to homeowners and taxpayers in the process.