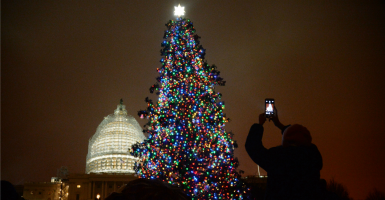 On a hot day in Washington, D.C., a federal agency issued 11 pages of new regulations on Christmas lights and other holiday decorations, calling certain products “a substantial product hazard.”

The Consumer Product Safety Commission has now taken those standards and imposed them as official, enforceable regulations.

Products found in violation of any of the imposed safety characteristics can now be stopped at ports or otherwise prevented from distribution without testing.

If Christmas lights are not made in accordance with these standards, the agency said consumers can be “seriously injured or killed by electrical shocks or fires.”

In its justification, the Consumer Product Safety Commission cited 258 deaths that have occurred as a result of dangerous holiday lights since 1980.

The vast majority of those deaths occurred before 1994, prior to when Underwriters Laboratories issued its voluntary standard for the industry.

Since the voluntary standard was put into place, that number has sharply declined.

In 2014, no deaths were attributed to being caused by Christmas lights. In 2015, the agency cited one death caused by holiday decorations.

Critics argued the rule “represents government waste, government overreach, or would result in a ‘waste of money,’” but the commission disagreed, citing its mission to protect consumers from “unreasonable” risks of injury or death.

“This allows us to leverage private sector success by giving our border inspectors a screening tool to keep out the tiny fraction of products that don’t comply, preventing injuries and deaths that the voluntary standard has shown are entirely preventable,” Joe Mohorovic, a commissioner at the Consumer Product Safety Commission, told The Daily Signal.

Diane Katz, a research fellow in regulatory policy at The Heritage Foundation, disagrees.

“This is regulating for the convenience and power of regulators—not for public safety.”

The rule takes effect on June 3.