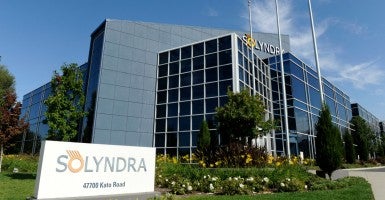 Despite many politicians hailing green energy programs as a success, taxpayers are likely to take a $2.21 billion hit for the Department of Energy’s loan and loan guarantee programs, according to a new government study.

If that weren’t bad enough, though, these taxpayer-backed programs have far-reaching, unseen costs to the American economy.

A recently published Government Accountability Office study estimates the “credit subsidy cost of the loans and loan guarantees in its portfolio—that is, the total expected net cost over the life of the loans—to be $2.21 billion, including $807 million for loans that have defaulted.”

The credit subsidy is the “net present value of the difference between projected cash flows to and from the government over the life of the loan.”

How do they determine what the credit subsidy is? Well, the Department of Energy “estimates the credit subsidy cost for each loan or loan guarantee by, among other things, projecting disbursements to the borrower as well as interest and principal repayments from the borrower, and adjusting these projected cash flows for default risk and other factors.”

In addition to taxpayer money squandered from bankrupt companies, taxpayers usually are paying government employees to evaluate companies for loans, as well as administer and monitor the loans. In some instances, the applicant pays the costs, but even with that, the taxpayers are in the red.

In November 2014, several news outlets ran stories saying that taxpayers would come out ahead from these programs because the majority of companies were repaying their loans. Politicians said the Department of Energy outperformed private banks and a few failures like the now-defunct solar company Solyndra were worth the risk. The Energy Department’s November progress report said the interest paid back on the loans surpassed the amount of money lost on bad bets.

But the Energy Department’s progress report failed to include the credit subsidy cost and the administrative costs as the Government Accountability Office report does.

But the economic damage extends well beyond the specific program losses. Taxpayers may see a $2.21 billion loss, but they won’t see are all the negative implications these programs have on the U.S. economy.

Because capital is in limited supply, a dollar loaned to government-backed projects will not be available for some other (possibly more viable) project. This means that the companies that drive innovation and bring new technologies into the market may not get support, while companies with strong political connections or those that produce something politicians find appealing, like carbon-free energy technologies, will get support.

Market-viable technologies do not need financial support from the taxpayer. If the technology is promising and worth the risk, companies will self-finance or obtain private financing elsewhere. However, if companies choose not to invest in that specific technology, the government has no business stepping in to play banker and distort market investments.

Whether the programs ultimately end up with taxpayers on the red or the black side of the ledger, the policy itself is a loser. Congress should prohibit the Energy Department from administering any new loan and loan guarantees—not just to protect the taxpayer but to drive our economy in the right direction.