Media, Environmentalists Were Wrong: How the Gulf Coast Roared Back After Oil Spill 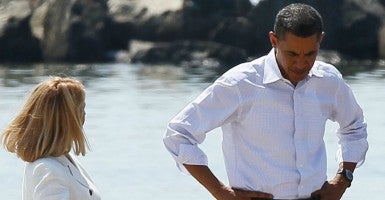 Five years ago this week a blowout of BP’s Deepwater Horizon oil rig 40 miles from the Gulf Coast tragically claimed 11 lives and spilled 3 million barrels of oil from the damaged wellhead into the Gulf. It’s hard to forget the video images of thick oil day after day gushing into the region’s waters.

It was a horrific accident that caused substantial damage to the ecology and commerce of the region. Gulf area wildlife, portions of the shoreline, tourism, fishers and shrimpers, and energy sector employment suffered large losses in the aftermath of the spill.

BP has paid close to $27 billion in penalties, payments to aggrieved parties, and clean up costs in one of the largest payouts for an accident in American history. This is enough money to hand every man, woman, boy, and girl in Chicago or Houston a $10,000 check. In addition, as the result of a court ruling last fall finding BP acted with willful misconduct and gross negligence leading up to the spill, BP could have to pay another $13.7 billion in Clean Water Act penalties.

But the good news on this fifth anniversary is that the lasting ecological damage from the spill that was originally feared, has not happened. The dire predictions by the media and the major environmental groups proved wildly off base.

Today, the Gulf region affected by the spill is enjoying a renaissance of energy production, booming tourism, and a healthy fishery industry. Scientific data and studies over the past five years show the Gulf environment is returning to its baseline condition. The remnants of the spill are hard to find.

A July 2011 report from the Coast Guard’s environmental assessment found that none of the dispersant constituents found in the thousands of water and sediment tests conducted exceeded the EPA’s chronic aquatic benchmarks. Five years later, wildlife populations have proven largely resilient. For instance, NOAA commercial fishery landings data show that after a drop off in the year of the spill, catch levels bounced back in 2011 to levels not seen in 11 years and they remain strong today.

Why has the damage been contained? First, thankfully, the vast majority of the 3.2 million barrels of crude leaked into the Gulf dispersed naturally, evaporating into literal thin air or biodegrading. Microbes, which already feast on the up to 1.4 million barrels of oil that scientists estimate seep naturally into the Gulf each year, increased in number following the spill—aiding greatly.

Today, the Gulf region affected by the spill is enjoying a renaissance of energy production, booming tourism, and a healthy fishery industry.

The massive $14 billion human clean-up response, with 100,000 personnel, 6,508 vessels, and 13.5 million feet on boom was unprecedented and effective. Dispersants successfully assisted natural dissolution by reducing the size of the oil compounds.

Some of the apocalyptic damage estimated proved to be mere propaganda. The National Center for Atmospheric Research predicted at the time that oil would enter the so-called “loop current”, reaching Florida’s Atlantic coast within a week. Synte Peacock, a NCAR scientist, warned “the scope of this environmental disaster is likely to reach far beyond Florida.” Not to be outdone, CNN meteorologist Chad Myers breathlessly reported that “there will be tar balls all the way up the East Coast, all the way to Europe.”

But the oil didn’t make it to Tampa—let alone Europe as the requisite combination of winds and current failed to materialize. By the end of July, NOAA Administrator Jane Lubchenco admitted that “For southern Florida, the Florida Keys, and the Eastern Seaboard, the coast remains clear … ”

And what of the long-term effects on the fishing and shrimping industries?

Advocacy groups such as the Southern Shrimp Alliance’s Jon Williams predicted the spill could last 40 years. CBS News Network’s Melanie Warner suggested that “this could mean a permanent end” to the Gulf’s seafood industry and that “ten years from now … there will very likely still be seafood—shrimp, bluefin tuna and maybe snapper and grouper—that are contaminated with BP’s oil.”

Not to be outdone on the contamination concerns, CNN correspondent David Mattingly worried about the “cascading effect on the entire food chain” from the spill.

Fewer than four months after the spill stopped, NOAA’s director of Sustainable Fisheries Science Center reported, “It appears so far that the impact on the larval population is relatively small.”

Data from NOAA confirm that post-spill Gulf fish populations are robust and that commercial seafood landings have generally been consistent with pre-spill ranges. And more than 10,000 government tests show it’s safe to eat.

The Audubon Society director Gregory Butcher warned the spill “could be the strikeout punch” for Louisiana’s state bird, the brown pelican. The executive director of the Gulf Coast Bird Observatory, Cecilia Riley, cautioned, “The disruption of the food web and lack of adequate food supplies could reduce avian productivity for several years.”

But in fact, Louisiana’s brown pelican population was still strong just a year after the spill, according to the U.S. Fish and Wildlife Services.

The effects of the spill were predicted to have long-term negative effects on tourism as well. The managing director of Oxford Economics USA opined, “History and current trends indicate a potential $22.7 billion economic loss to the travel economies of the Gulf Coast states over the next three years.”

In actuality, tourists have flocked to the Gulf every year since the spill, shattering records the summer immediately following the disaster in numerous locales, including Panama City and the Emerald Coast.

Big Green has tried to capitalize on the BP spill as the reason to block any further offshore drilling. And while there are critical caution signals from the accident, what is needed most is rational offsetting of costs versus tens of billions of benefits and hundreds of thousands of jobs, increased access to energy, community development and so on.

Most in the environmental movement portray the ecology of our planet as fragile and weak. No. The story of horrific accidents like this and natural ecological occurrences like Katrina, is that Mother Nature adapts and she has awesome healing powers.

The Gulf recovery has been swift and impressive and the doomsayers were thankfully wrong. When something like this happens, we should listen to the sage advice of the world’s most famous lawgiver, Moses, who warned us of false prophets: “If the thing does not come about or come true … the prophet has spoken it presumptuously; you shall not be afraid of him.” (Deut. 18:22). Good advice when it comes to the Green Movement prophets of doom.