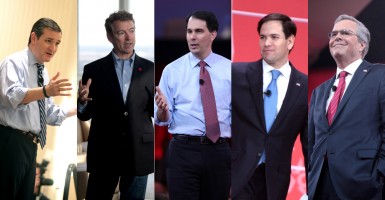 Tycoon philanthropists Charles and David Koch may endorse a conservative Republican candidate for president before the party’s nominating convention, but any such decision is six months or more away.

“While I think Governor Walker is terrific, I am not endorsing any candidate for president at this point,” David Koch says.

An endorsement likely would turn on a candidate’s approach to one or more issues of importance to the Koch brothers, beginning with their opposition to the federal Export-Import Bank.

“If you can’t stand up against corporate welfare, how are you going to go in with any credibility and [reform] some of the broader entitlement programs?” a Koch aide said today in an interview with The Daily Signal, referring to presidential hopefuls’ willingness to pull the plug on the Export-Import Bank.

“If you can’t do the small things, how are you going to do the big things?” he added. “Corporate welfare is a growing monster that we have to tackle.”

The Daily Signal today confirmed that the Kochs are pondering endorsing a White House hopeful before the 2016 nominating convention, either on their own or through several hundred major donors associated with the group Freedom Partners and its political action committee.

The brothers and their donor network simply want to reserve that option, the Koch aide told The Daily Signal.

“The reality is, nothing has changed,” he said. “We are looking at each of the candidates and trying to see how they stand on the issues of importance to us.”

In addition to supporting free markets and opposing corporate cronyism, Freedom Partners is focused especially on what it considers government overspending and overregulation as well as health care and energy policies.

The primary season doesn’t begin in earnest until February, and as of now only three major GOP candidates officially are in the race.

All three—Sens. Ted Cruz of Texas, Rand Paul of Kentucky and Marco Rubio of Florida—sought the favor of Freedom Partners donors in a joint appearance at a private gathering early this year in Palm Springs, Calif.

The Koch-affiliated donors also are evaluating other likely GOP candidates. Among them are two current governors, Wisconsin’s Scott Walker and Louisiana’s Bobby Jindal, and two former governors—Jeb Bush of Florida and Rick Perry of Texas. Walker appeared separately at the Palm Springs event.

Among their considerations: how candidates see the role of the federal government and how they “resonate with voters.”

In an interview with USA Today published this evening, Charles Koch said the brothers and their advisers have focused on five hopefuls with a “good message” and  “good chance of getting elected”—Walker,  Bush, Cruz, Paul and Rubio. He said:

What we’ve told them all is that right now, we’re not supporting anyone. We’re telling them that if they want our support, one way to get it is articulating a good message to help Americans get a better understanding and a better appreciation of how certain policies … will benefit them and will benefit all America.

Digital outlets devoted to politics lit up Monday when The New York Times reported that David Koch appeared to say in public that Walker is the brothers’ favored candidate.

Laughter and applause cut him off. After a pause, he added: “Then we will support.”

After Walker spoke to a private gathering of donors at the New York club, Koch told reporters the Wisconsin governor could defeat Democratic favorite Hillary Rodham Clinton “by a major margin,” the Observer reported.

David Koch later issued a “clarification,” which an aide provided to The Daily Signal. It reads: “While I think Governor Walker is terrific, let me be clear I am not endorsing or supporting any candidate for president at this point in time.”

Some media and other observers expressed surprise that the Kochs and Freedom Partners donors would give an audience to Bush and consider backing him, since some conservatives criticize his post-governorship stands on education and immigration policies.

The Koch aide noted, however, that Bush was invited to the January meeting but could not make it because of a scheduling conflict.