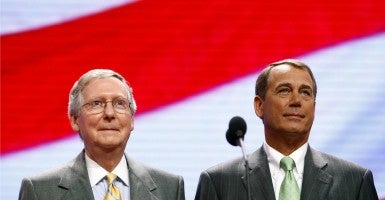 With just hours to go before Medicare physicians potentially faced deep cuts in payments, the Senate passed legislation that stabilizes such payments but adds $141 billion to the deficit.

Fresh off of a two-week recess in their home states, the Senate voted 92-8 to pass the Medicare Access and CHIP Reauthorization Act of 2015, which would replace the Sustainable Growth Rate. Known as the “Boehner-Pelosi” plan for its architects House Speaker John Boehner and Minority Leader Nancy Pelosi, the legislation calls for the implementation of a new payment system for Medicare physicians.

If Congress failed to act by midnight, doctors’ payments would’ve been cut by 21 percent.

“Republicans have a lot of explaining to do. Rather than seizing the opportunity to make further, fiscally responsible reforms to Medicare, they chose to embrace the deficit spending ways that defined the Obama administration,” Dan Holler, spokesman for Heritage Action for America, told The Daily Signal.

Senators considered six amendments—three from Republicans and three from Democrats—to the legislation before voting on its final passage. An amendment from Sen. John Cornyn, R-Texas, repealed the Affordable Care Act’s individual mandate, but needed 60 votes to pass. A second from Sen. Mike Lee, R-Utah, required the legislation to adhere to the Pay-As-You-Go rule. It only needed 51 votes to pass.

President Obama likely will sign the Boehner-Pelosi bill into law.

The House passed the “doc fix” bill late last month, 392-37. Though the legislation received bipartisan support, conservatives in the House argued that permanently keeping physician payments from being cut came with a substantial cost.

Roughly $73 billion of Boehner and Pelosi’s $214 billion plan would be paid for. The remaining $141 billion would be added to the deficit, a report by the nonpartisan Congressional Budget Office found.

“The so-called ‘SGR’ is a flawed approach that needs to be eliminated, but doing so should be a catalyst for real retitlement reform,” Cruz said in a statement. “Any deal should be fully paid for and include significant and structural reforms to Medicare that provide seniors more power and control over their health care.”

To address the $141 billion in deficit spending, Lee proposed an amendment striking the legislation’s exemption from the Statutory Pay-As-You-Go Act of 2010, or PAYGO.

PAYGO requires the net effect of bills enacted by Congress at the end of a legislative session to be deficit neutral. Congress could pass legislation that increases the deficit, but lawmakers must enact other laws with equal or greater savings.

If bills are passed that collectively increase the deficit—such as the Boehner-Pelosi doc fix—a mandatory sequester would be triggered.

Lee’s PAYGO amendment garnered support from fellow conservatives in the Senate, including Sens. Jeff Sessions of Alabama and Ben Sasse of Nebraska.

Had Lee’s amendment passed—and the bill gone back to the House—it likely would’ve been supported by conservatives who voted against the original legislation.

“I strongly support Senate conservatives’ efforts to ensure the SGR bill is fully offset,” Rep. Jim Jordan, R-Ohio, said in a statement to The Daily Signal.

However, Boehner said earlier today he didn’t expect the House to have to act again.

In anticipation of the Senate voting on Lee’s amendment, Heritage Action for America and the Club for Growth, “key voted” the measure. The groups encouraged lawmakers to vote in favor of Lee’s amendment.

The Sustainable Growth Rate was implemented in 1997. The formula calculates the Medicare budget each year by tying the program’s spending to the growth of the economy.

The concept worked well at first, but as health care costs outpaced the economy, Medicare doctors faced frequent cuts to reimbursements. To stabilize physicians’ payments, Congress enacted a series of patches, or “doc fixes,” 17 times over the last 14 years.

Republicans and Democrats agree the Sustainable Growth Rate is unworkable. However, how the permanent doc fix would be paid for proved to be a point of contention for Republicans, Democrats and conservative lawmakers.