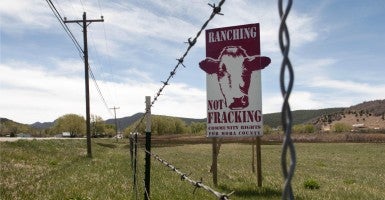 Legislation that would prohibit hydraulic fracturing, or “fracking,” in Maryland for two years was recently sent to the governor’s desk.

The Senate approved the bill in a 45-2 vote earlier this month. If signed into law, it would institute a moratorium on fracking in the state through October 2017.

The Maryland House of Delegates passed the legislation in a 102-34 vote on Friday.

The legislation had initially called for an eight-year moratorium on fracking, but was reduced to two during the legislative process.

Fracking is currently not permitted in Maryland, but western portions of the state sit atop the gas-rich Marcellus Shale formation, utilized by its neighbors West Virginia and Pennsylvania.

While he has not taken a position on either specific piece of legislation, Baltimore’s WBAL reports that Gov. Larry Hogan, R-Md., said he will “take a hard look at any fracking legislation” that reaches his desk. The governor has previously said the potential economic impact of fracking could benefit the state.

Former Maryland Gov. Martin O’Malley, a likely Democratic presidential candidate, put forth a plan to allow for some fracking in the state under strict guidelines as he left office.

Pro-fracking activists say that a temporary moratorium on fracking is the first step to a ban similar to the one instituted in New York State by its Democrat Gov. Andrew Cuomo.

Sandra Steingraber, co-founder of New Yorkers Against Fracking, recently participated in a conference call with activists in Maryland. During the call, she said it was a “moral imperative” that the legislation in Maryland becomes law.

“It’s a misguided policy,” Bloomberg said. “To keep coal-fired power plants in upstate New York and not frack doesn’t make any sense at all.”

Bloomberg also told The Wall Street Journal that the economic benefits of fracking “outweigh” the benefits of other fossil fuels, and potential risks could be minimized with “tough regulation.”

Simon Lomax, the western director of Energy In Depth, a research and education program associated with the Independent Petroleum Association of America, told The Daily Signal that anti-fracking activists are trying to duplicate their success in New York in other states:

“The same political activists who wrote this anti-fracking playbook in New York are trying to copy and paste their campaign tactics into Maryland,” said Lomax. “They’re doing the same thing in other states, too.”

Nick Loris, an economist who focuses on energy, environmental and regulatory issues at The Heritage Foundation, said that New York’s fracking ban shouldn’t be replicated in other states.

“Blanket moratoriums ignore the facts that fracking has been done safely and responsibly across the country for decades, producing tremendous economic benefits,” said Loris. “Instead of following New York’s lead, Maryland should look to states like Pennsylvania and all of the others that continue to demonstrate economic growth and environmental protection are not mutually exclusive.”