Ukraine Moves to Ditch its Soviet Past 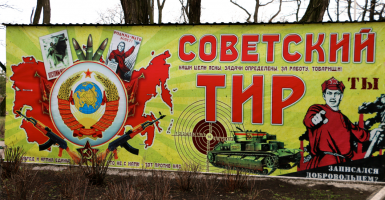 KYIV, Ukraine—The Ukrainian parliament approved a law Thursday renaming the Great Patriotic War as the Second World War, underscoring a sweeping move by the post-revolutionary government here to ditch its Soviet past.

Also on Thursday, Ukrainian lawmakers passed a law banning the promotion of symbols of “Communist and National Socialist totalitarian regimes,” as well as a law granting special legal status to veterans of the “struggle for Ukrainian independence” from 1917 to 1991 (the lifespan of the USSR).

According to Ukrainian media, the symbols banned under Thursday’s bills include:

Wednesday’s bills targeted what some lawmakers called “Soviet clichés” and painted Ukraine as the victim of both Nazi Germany and Soviet Russia.

“During the commemoration of the victims of the Second World War, it is necessary to cancel the use of Soviet symbols,” said Volodymyr Viatrovych, head of the Ukrainian Institute of National Remembrance, in an interview with the Ukrainian news outlet UNIAN.

Abandoning Ukraine’s Soviet legacy has upended decades-old ways of thinking for Ukrainian citizens who grew up in the USSR. “In the past year we’ve done a complete mental reversal,” said Evgeny Oksanichenko, 60, a factory manager in Mariupol and former Communist Party member.

“For decades we were told that Russia would protect us, and America was the enemy,” he said. “And now we think the opposite is true.”

Kyiv’s decision to scratch the Great Patriotic War from the national lexicon comes one month before Moscow hosts world leaders on May 9 to celebrate the 70th anniversary of Nazi Germany’s surrender. The renaming is a symbolic pushback against the Soviet narrative that countries within the USSR. banded together for the defense of a common fatherland after the Nazi invasion in June 1941.

Moscow was swift to push back against the moves.

“The only thing that can be regretted is that such decisions and statements made in the weeks preceding the Victory Day anniversary will make many veterans meet the holiday with tears in their eyes. I mean the veterans of the Great Patriotic War,” Russian Presidential Press Secretary Dmitry Peskov told journalists Thursday, according to the Russian news agency TASS.

Many Ukrainians also point to historical grievances like the Ukrainian famine of 1932 to 1933, in which as many as 7 million Ukrainians starved to death as a result of Stalin’s forced collective farming program, as reasons why Soviet legacies should be scrubbed.

Russian officials, however, accuse Ukrainian lawmakers of distorting history. On Wednesday a top Russian diplomat responded to a Ukrainian lawmaker who referred to Russia as an “aggressor nation” in World War II.

“They blatantly falsify history, tarnish the history of the war, casting a shadow over the Great Victory of the Soviet people, which made a decisive contribution to the fight against Nazism,” Russian Foreign Ministry Commissioner for Human Rights, Democracy and the Rule of Law Konstantin Dolgov said, according to TASS. Russian and separatist propaganda often paint the post-revolution government in Kyiv as neo-Nazi or neo-fascist.

“None of these neo-Nazis, followers of Bandera and other ultranationalists has been punished and called to account,” Dolgov said Wednesday, according to TASS. “[A]ll this neo-Nazi mayhem has been taking place under the connivance and even support of the Ukrainian authorities and tacit non-resistance, at the very least, and even encouragement from certain political circles in the West.”

While in Kyiv, sidewalk vendors sell paintings and rolls of toilet paper with the likeness of Russian President Vladimir Putin sporting a close-trimmed Hitler moustache. Stickers of Russian flags adorned with a swastika are a common sight in Kyiv’s Independence Square (the Maidan).

And Western pundits and politicians often compare Putin’s land grabs in former Soviet states with Hitler’s annexation of the Sudetenland prior to World War II.

The war’s legacy is also evident on the battlefield. Many pro-Ukraine civilian volunteer battalions have resurrected symbols and flags from Ukrainian partisan groups that fought both Nazi and Soviet troops in the war.

The debate over the war also reveals the lasting scars of a conflict that killed about 26 million in the Soviet Union. In another World War II-related event Wednesday, Ukrainian President Petro Poroshenko met with Polish President Bronislaw Komorowski at an event in Warsaw to remember the victims of totalitarianism.

“God forbid us from seeing a new Babyn Yar, Bykivnia, Katyn, and a new Holocaust or Holodomor,” Poroshenko said, referencing both Nazi and Soviet atrocities before and during the war, according to Ukrainian media.

“Anschluss, annexation, occupation—our eastern neighbor has just refreshed these notions in our memory,” he added.