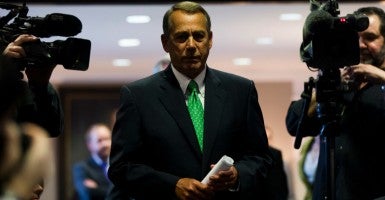 According to the Actuary’s report, net federal health care spending would increase by $102.8 billion over the next 10 years and gross spending on Medicare would increase by $210 billion. Higher Medicare premiums on Medicare Parts B and D (for example, doctor’s services and drug benefits) would cover about $55 billion of the additional cost and cuts to Medicare Part A (for example, hospital inpatient care) would reduce Medicare spending by another $32 billion.

The most important contribution of this report is in showing the longer-term effects of the House proposal. In particular, one of the primary selling points for this deal is that it is a permanent doc fix. No longer will Congress need to address the annual cuts to doctors’ payment rates.

Proponents of the deal claim it repeals the [un]Sustainable Growth Rate (SGR) payment formula and replaces it with a more responsible payment schedule that protects doctors from large cuts that threaten seniors’ access to care.

However, according to Medicare’s Chief Actuary, cuts to doctors’ payments will need to be addressed once again even under the House’s “solution” to the Sustainable Growth Rate cuts and as early as 2025. In fact, payments will eventually be lower than under current law where there isn’t a patch in annual payment reductions and large Sustainable Growth Rate cuts are assumed to take effect:

[P]hysician payment rates under H.R. 2 would be lower than scheduled under the current SGR formula by 2048 and would continue to worsen thereafter. Absent a change in the method or level of update by subsequent legislation, we expect access to Medicare-participating physicians to become a significant issue in the long term under H.R. 2.

How much lower will the House doc fix deal take physician payments? Here’s the Actuary’s finding:

By 2048, Medicare prices under H.R. 2 would be less than under the current-law SGR system, and, by 2087, they would be just one-third of prices based on the MEI update [a measure of the cost to physicians of providing services] and 30 percent lower than what they would have been under current law.

Rather than a permanent replacement to the Sustainable Growth Rate, it is much more likely that the House doc fix will be a shorter term patch requiring another series of patchwork legislation just nine years from now.

The Actuary’s report also points out that, over the 75-year period, total spending on Medicare under the House bill will be lower relative to current law. But that estimate is entirely driven by the fact that doctors’ will be paid much less than they would otherwise be if the House “doc fix” were not enacted by Congress.

In other words, the House measure includes a huge budget gimmick by shifting the timing of doctors’ payments forward and then cutting them drastically after 2025. That’s neither fiscally responsible nor a real solution to the Medicare physician payment problem.

It’s time to replace the Sustainable Growth Rate in a responsible way. Under the current payment system and the House’s doc fix deal, “the quality of care provided to Medicare beneficiaries would likely not keep pace with the care furnished to other types of patients.”

When the Senate takes up the House bill next week, lawmakers should agree to pay for it (like 98 percent of all past doc fixes in the near term over the current 10-year budget window) by removing the pay-as-you-go (PAYGO) exemption. Striking the PAYGO exemption would provide Congress with the opportunity to address Medicare’s unsustainable payment system while improving the program.