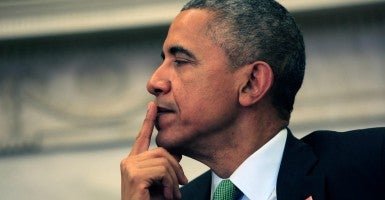 In response to Wisconsin Gov. Scott Walker’s criticism of his Iran policy, President Obama suggested that the presumed candidate for the 2016 Republican presidential nomination “bone up on foreign policy.”

In other words, anyone who disagrees with the president on Iran’s nuclear program, or any other national security issue, is just not knowledgeable enough to understand.

Of course, there is a very serious irony at play here. The president’s foreign policy is in shambles from Ukraine to the Middle East to the South China Sea. Yet it is his critics who just don’t get it.

A great deal is certain to be written on this and other ironies in the days to come. Indeed, it takes gall for a president who came to office with negligible experience in foreign affairs, and even less apparent interest, to criticize the background of another aspirant to the office.

Many liberals do not accept that intelligent, decent people can have honest differences of opinion.

It is also tempting to point out how little Obama appears to have grown into the job. After six years, he still displays a troubling misunderstanding of power and the leadership role the United States plays in the international system.

But the cheap shot at Walker also betrays a liberal conceit too rarely commented upon. Many liberals do not accept that intelligent, decent people can have honest differences of opinion. And they are aided and abetted by a media that—whatever its differences with the president on their own access—are always eager to be seen as “smart.” As a result, the president’s critics are often portrayed as either uniformed or politically motivated.

Obama used this dynamic to excellent effect in the 2012 campaign when he mocked another “inexperienced” state government chief executive, Mitt Romney, for his concern about Russia and the deteriorating state of America’s armed forces.

Yet Romney was right about both. But the gotcha moments were too good for the press to resist. Obama was smart; Romney not so much. The story was written. Sen. Tom Cotton, R-Ark., (a graduate of Harvard Law School, by the way) and the 46 other senators who signed the open letter to Iran’s leaders concerning Congress’ constitutional authorities fell afoul of the same dynamic.

Criticism of Obama’s Iran policy is not a matter of who’s smarter. It should be a question of who’s right. Questioning the foreign policy credentials of critics with a cute turn of phrase cannot substitute for substantive defense of an already highly controversial policy choice.