Why a Russian Decided to Fight for Ukraine 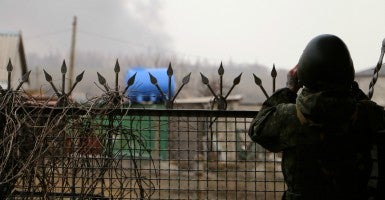 MARIUPOL, Ukraine—Even while speaking through a translator, Andrey is a man of few words.

When asked why he defected from Russia to join a Ukrainian National Guard regiment, the 22-year-old Muscovite simply replied: “Common sense.”

After an assurance that his face would not be photographed or his last name used, Andrey opened up, explaining in more detail why it was such a logical decision to leave behind his life in Moscow to fight pro-Russian separatists—who, he claimed, his native country is both arming and sending troops to support.

Sitting at the cafeteria in the Azov Regiment’s camp in Mariupol only minutes before leaving for the front lines, Andrey talked about life in Russia under what he called the “Putin regime.”

“Many young people in Russia who have common sense understand they have been deceived by Putin,” he said between sips of tea, casually leaning back in his chair with his Kalashnikov assault rifle propped against the table. “I have a brain, but there are also many young people who have been brainwashed by the propaganda.”

“There are more of us,” he added. “Putin is afraid of a Russian Maidan.”

Two brushes with the “Putin regime” and its repressive tactics ultimately spurred Andrey to leave Russia. The first happened after he witnessed pro-reform protestors handing out flyers in the Moscow metro. Even though he was just a passerby, Andrey said he was forcibly taken into custody and interrogated by a group of four men who never revealed for which agency they worked.

“They said they just wanted to have a talk,” he said. The second instance was at a government-sanctioned peace march in Moscow, in which Andrey was participating to protest Russia’s involvement in the Ukraine conflict. He said police began beating protestors without provocation.

“Their crime? They were just holding signs,” he said.

Fed up with life in Russia and with no substantial opposition party or movement to join, Andrey said he did “what any sensible man would do.” He left Russia to fight for Ukraine as a member of the Ukrainian National Guard Azov Regiment.

The Ukraine war has drawn fighters from around the world. Loose government oversight over civilian volunteer battalions opened a pathway for foreign fighters from countries including the United States, France, Germany, Norway, Sweden, Georgia, Poland, Spain, the Czech Republic, the United Kingdom, Croatia, Italy and Canada to join the ranks of pro-Ukrainian units with virtually no red tape.

There is even a Chechen volunteer battalion fighting for Ukraine named after Dzhokhar Dudayev, the Chechen rebel leader who led a war against Russia in the 1990s. But recruitment rules were tightened after a push by Kyiv to incorporate volunteer battalions into the National Guard, sending many foreign fighters home. Although, according to an Azov Regiment spokesman, a new law has removed Ukrainian citizenship as a requirement for joining the National Guard.

Unlike the majority of foreign fighters in Ukraine for whom returning home is an option, Andrey said he will never go back to Russia.

“They will never forgive me,” he said. “I will be persecuted.”

Andrey, however, wasn’t worried about Russian authorities retaliating against his family in Moscow. In fact, with the exception of his grandmother, he said his family generally supported his decision to leave.

“My grandma went through the Stalin times and it’s difficult to convince her that Putin isn’t right,” he said. “She watches Russian news and is terrified by what they tell her is going on in Ukraine. It’s all lies of course.”

Years of exposure to Russian propaganda also distorted Andrey’s perception of Ukraine before his arrival. He wondered whether the country had truly been taken over by Nazis and far-right groups as Russian media reports had claimed, or if the Ukrainian war effort was actually a front for NATO expansionism as Russian media sites had also reported.

“Of course it’s all a lie,” he said. “When I got here, I realized the situation was totally different.”

One of the key differences was the military training and firepower of the separatists.

“We are not fighting coal miners and tractor drivers, we are fighting trained professional soldiers,” he said, referring to Putin’s characterization of the separatists on Russian TV.

“And where do these so-called tractor drivers and coal miners buy grenade launchers?” he added. “From a supermarket?”

Following the interview, Andrey left for the front lines near Shyrokyne, a small town about eight miles east of Mariupol. His mission that day was to film evidence of separatists using heavy weapons in violation of the Feb. 12 cease-fire agreement.

He said he doesn’t get scared anymore before going to the front lines. While at the front, amid the constant sounds of mortars, artillery and small arms, he appeared calm, displaying the muted reaction to danger common to soldiers who have spent much time in combat.

When separatists’ heavy weapons ignited a fire in a residential area, sending up plumes of smoke, he climbed to the roof of the house being used as the Azov Regiment’s combat outpost for a better vantage point from which to film the damage. He leaned around a corner, exposing himself to potential sniper fire, and filmed.

Asked earlier what he was fighting for in Ukraine, Andrey succinctly replied: “Justice.”

Responding to a follow-on question, he added: “For Ukraine.”