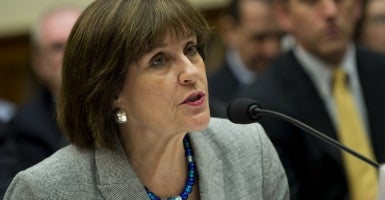 On March 31, Ronald Machen, the outgoing U.S. attorney for the District of Columbia, wrote House Speaker John Boehner to inform him that the Justice Department would not present Lois Lerner’s contempt citation to a federal grand jury.

The letter explaining his decision is an exercise in misdirection—the kind of misdirection that magicians use to fool an audience. Why? Because at no point in his detailed, seven-page legal analysis does Machen mention the most important point demonstrating that Lerner did, in fact, waive her Fifth Amendment right.

Lerner made two abbreviated appearances before the House Oversight and Government Reform Committee—one on May 22, 2013, the other on March 5, 2014. As Machen noted, at the May 22 hearing, Lerner gave a short statement declaring her innocence and claiming that she had “not done anything wrong,” had “not broken any laws . . . IRS rules or regulations,” and had “not provided false information to this or any other congressional committee.” She then proceeded to assert her Fifth Amendment right against self-incrimination and refused to answer any questions.

When Lerner was recalled before the House Committee on March 5, 2014, she again refused to answer any questions and reasserted her Fifth Amendment privilege. Chairman Darrel Issa, R.-Calif., informed her that the committee had voted that she had waived her Fifth Amendment right and that she would be held in contempt if she continued to refuse to answer the committee’s questions.

In the March 31 letter, although acknowledging that the House Committee found that Lerner’s “opening statement was the equivalent of ‘voluntary’ testimony,” Machen concludes that, in declaring her innocence, Lerner did not waive her Fifth Amendment privilege because “case law establishes that Ms. Lerner’s general denials of wrongdoing did not amount to ‘testimony’ about the actual facts under the Committee’s review.”

Having decided that Lerner did not waive her Fifth Amendment privilege, Machen goes on to claim that it is within his discretion not to present the House’s May 7 contempt citation to a federal grand jury. He bases that claim on his reading of a 1984 legal opinion from the Justice Department’s Office of Legal Counsel. That despite the federal law, which provides that, once the House of Representatives has voted to find a witness in contempt, the speaker of the House must certify the matter to the “appropriate United States Attorney, whose duty it shall be to bring the matter before the grand jury for its action” (emphasis added).

Although this is debatable from a legal standpoint, and lawyers can disagree on whether Lerner’s declaration of innocence at the public hearing was or was not testimony that waived her Fifth Amendment privilege, what is not debatable is that there is a gaping hole in Machen’s recitation of the facts and his legal analysis.

According to The Wall Street Journal, right after Lerner’s frustrating March 5, 2014 appearance before the House committee, her lawyer, William Taylor III, told reporters at a press conference that Lerner had given a “lengthy interview” to Justice Department prosecutors “within the last six months, as part of the agency’s investigation into IRS targeting of conservative tea-party groups.” Taylor even admitted that Lerner had freely given DOJ her testimony without getting any promise of immunity from prosecution.

Why is this significant? Because, if Taylor is to be believed, Lerner obviously did not assert her Fifth Amendment privilege when she gave Justice prosecutors a “lengthy interview” about the very subject she had been subpoenaed to discuss with the House Oversight and Government Reform Committee. While the prevailing rule in most federal courts is that a waiver of the Fifth Amendment privilege at one proceeding does not carry through to another proceeding, that is not the rule in the District of Columbia.

In Ellis v. U.S. (1969), the D.C. Court of Appeals specifically refused to adopt that rule, saying it was “unsound.” As the court held, “once a witness has voluntarily spoken out, we do not see how his protected interest is jeopardized by testifying in a subsequent proceeding, provided he is not required to disclose matters of substance which are unknown to the Government.” Under those circumstances, a person can reassert the privilege only if there is a “real danger of further criminalization.”

Ellis involved a defendant who voluntarily testified before a grand jury but then refused to testify at trial, asserting his Fifth Amendment privilege against self-incrimination. Once Lerner voluntarily spoke to Justice Department prosecutors without receiving a grant of immunity, she lost her ability to invoke the privilege to avoid answering congressional questions about the same information she had already provided.

Machen says that a “team of experienced career prosecutors” was assigned to review this matter, so certainly they would know about the Ellis rule. They also must know about Lerner’s extensive testimony to the prosecutors. So why would Machen completely ignore this in his letter?

Ignoring highly relevant, although perhaps inconvenient, facts, outgoing U.S. Attorney Ronald Machen has issued a flawed legal analysis. It reaches an erroneous, but politically expedient, conclusion—one that gives Lerner a pass and further hinders congressional efforts to get to the bottom of this scandal. It’s a pretty slick trick. No wonder Machen’s pulling a disappearing act.