What the Domino’s CEO Would Change on Taxes, Obamacare 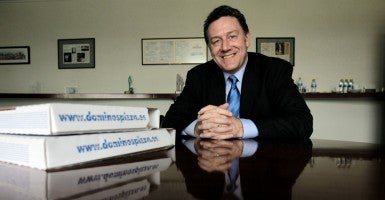 Here’s a question that has been puzzling Patrick Doyle, the CEO of Domino’s, for months, as he puts it: “How do we list the calorie content of our pizzas on a menu when we have 34 million different variations of pizza?” The new menu labeling law, a creation of the Affordable Care Act, could require his company to do just that.

It’s a textbook case of a mindless and arcane regulation, of Washington bureaucrats imposing on businesses costs that will have no effect on public health. “We’ve been voluntarily doing menu labeling for over a decade,” Doyle says. “We even have an online calorie calculator we call the ‘Calo-Meter’ for every possible pizza order, and it tells customers what happens if they substitute, say, sausage for mushrooms, because we strive to be very nutrition-conscious.”

That isn’t good enough for the feds. The Food and Drug Administration is now insisting that every one of the chain’s 5,000 stores post menu boards on the wall with calorie counts. “It’s crazy and it doesn’t help consumers,” Doyle says, because “90 percent of Domino’s orders arrive by phone or Internet and are for delivery, so fewer than one of 10 customers will ever see these signs.” The signs will cost about $2,000 at every store, and each change of menu will require new ones. That is about $10 million of extraneous costs nationwide for Domino’s. Thank you, Washington.

Other than that, Doyle is having a good day when I visit him at the Domino’s world-wide headquarters in Ann Arbor, Mich. And a very good year, with sales up 12 percent in the past quarter alone.

The headquarters are a few miles up the road from where the original Domino’s Pizza opened in 1960. Doyle, who is 51, is tall, stocky, affable and appropriately a Michigan man through and through, having grown up in Midland and earned a degree at the University of Michigan. In his five years as CEO, annual sales have climbed to $9 billion from about $2 billion. Some 250,000 workers wear a Domino’s uniform and sell roughly one billion pizzas each year. During the Super Bowl, Domino’s was taking a dizzying 1,400 orders a minute.

Making pizzas may not be the sexiest business—though it’s a $125 billion world-wide market. But while investors obsess over finding the next Facebook, the share price of Domino’s has soared from $13 in 2010 to just over $100 today. It has been among the top performing stocks in the Fortune 100.

Doyle has helped take the company global, with stores operating in 80 nations and expansion plans throughout Asia. In sales, Domino’s is now the No. 1 restaurant chain in India. Sub-Saharan Africa is also among the company’s fastest-growing markets, with a billion people and a growing middle class. “We’ve discovered Africans love pizza,” he says. “They order them on their mobile phones.”

Things weren’t always flying so high in Ann Arbor. Doyle became CEO after two of the company’s worst years, and sales were still sliding. One of his first decisions was to take an unorthodox approach: “We held a series of focus groups with consumers and we discovered that people hated the pizza. So we ran these TV ads featuring Americans complaining about how bad Domino’s pizza tasted.” Then Doyle appeared on screen with an apology and promise: “We hear you America. Sometimes you know you’ve got to make a change. Please give us another try.”

He adds with a laugh that the one thing in his career that impressed his children was when they were in a New York restaurant and comedian Amy Poehler spotted him and shouted, “Hey, you’re the pizza guy.”

In the three months following those ads, Domino’s had its fastest rise in sales in company history. “I think consumers really appreciated that we were direct and honest with them,” he explains. That ad campaign is now considered a textbook crisis-management story, with its lesson in honesty as a best commercial policy.

Domino’s is also riding the digital revolution. “In a lot of ways we’re really a technology company,” Doyle says. “We’ve adapted the art of pizza-making to the digital age. Globally, we’re already at a run rate of about $4 billion of digital sales.” He adds that digital drives sales by making ordering easier and more efficient, and saves money on bad orders because customers “take their own orders so they make fewer mistakes.”

His goal is to have every iPhone in the world equipped with a Domino’s app, and the company is working with Ford Motor Co. on a voice-activated technology that will let motorists order a large thin-crust pepperoni with onions while driving home from work.

The atmosphere at company headquarters feels more like Silicon Valley than a fast-food company. Most employees here are computer programmers and technicians monitoring in real time what people are ordering, how long it is taking to fill an order, and the online complaints and comments that stream in. Their mission is to streamline the pizza-making process from the time the order arrives to when the pie is handed off at the customer’s front door. If the goal is delivery in 30 minutes or less, every innovation that shaves 10 or 15 seconds is a major money saver when you’re selling a billion pies a year. Although the Domino’s menu also includes such things as sandwiches, pasta and chicken wings, 80 percent  of its sales are pizzas.

Doyle is unconditionally bullish on the U.S. economy. “The big story since the recession is that American households and businesses have become lean and efficient and have paid down debts. Consumers finally have money and they are starting to spend it,” he says.

Meanwhile, as the head of one of the nation’s biggest employers, Doyle sees the effects of what he calls a “tightening of the labor market” firsthand. “Frankly, right now, it’s getting harder and harder to hire. We have shortages of truck drivers and delivery people.”

Such real-world experience makes Domino’s a barometer of sorts. “My take is that the official statistics are underestimating the strength of the labor market. Look, it has been a long, slow recovery. We’re now six years into it and we’ve finally reached the point where there seems to be more demand for labor than there is trained supply.” For job seekers “that is great news, right?”

As for those who fret that only the rich are getting richer and upward mobility isn’t possible, Doyle says they should pay more attention to what happens at Domino’s. “Over 90 percent of our 900 franchisees started as an hourly worker in the store,” he says. “Most of them started as delivery drivers at minimum wage. They work their way up. They become a manager. Then they come in, they apply to buy a store.” So from earning $7 or $8 an hour, they now earn $80,000 to $100,000 by operating a franchise. Many have become millionaires. “This is absolutely a story of upward mobility in America.”

If he were economic adviser to the president, what reforms would he recommend to accelerate growth and hiring? Without hesitation he says: “Simplify the corporate tax. It’s a killer. We pay 38 percent at Domino’s.” He’s including state and local taxes, but that’s a huge burden, especially given that many large corporations pay below 10 percent. “Just get rid of all the loopholes—and make it fair with a broad base and lower rates.” Then he adds, only half-kidding: “No one in Washington ever woke up and said ‘let’s have a loophole for pizza makers.’” Sounds like he needs a lobbyist.

One of Doyle’s biggest worries is that the Domino’s franchise-owner model—which is also used by thousands of other retail and restaurant stores—has come under assault from trial lawyers, unions and the National Labor Relations Board. These groups want to treat a Domino’s or Popeyes franchise store and the parent company as “joint employers.” This would mean a locally owned store with a few dozen staff would still have to comply with, for instance, the ObamaCare rules that only apply to firms with more than 50 workers. Seattle passed a minimum-wage law last year that treats franchise restaurants as big businesses that must pay a super-minimum-wage that phases up to $15 an hour.

“You’ve got 20 million people today employed in the franchise industry in the U.S. Part of why small business owners want to be in a franchise is because they’re getting support from each other, and they’re getting support and ideas from a company. Franchise stores have dramatically higher success rates than people who are just doing it all on their own,” Doyle says. “Why destroy a model that is almost uniquely American and has been a tremendous success for 50 or 60 years? This would be horribly detrimental.”

Doyle is optimistic about the world economy and how the digital revolution will continue to lift living standards for billions in the coming decade. Even in sub-Saharan Africa per capita incomes are growing at 5 percent annually. “I’m a free trader. I just believe in my core that free markets, technology, innovation, cheap energy and globalization will be triumphant and will make people better off.” They will also, not coincidentally, make people order more pizzas on their smartphones.