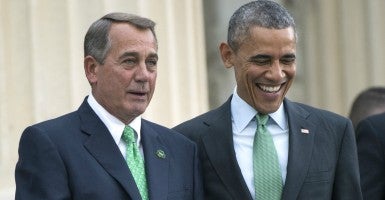 The House Republican congressional leadership is poised to announce a major “deal” with House Democrats on repealing the troublesome “Sustainable Growth Rate” (SGR) formula for updating Medicare physician payment. Such a change is expected cost taxpayers over $200 billion over 10 years.

Yet major press reports indicate that only $70 billion of the tab is expected to be paid for. In other words, taxpayers will be faced with another $130 billion in deficits over the next 10 years.

This represents a fundamental shift among some Republicans on how they view the Medicare physician payment and the deficit problem. During the debate on Obamacare, then-House Minority Leader John Boehner, R-Ohio, rightly denounced Democratic attempts to then enact an unfunded SGR fix. On Nov. 19, 2009, Boehner said: “This irresponsible ‘doc fix’ proves once again that out-of-touch Washington Democrats simply cannot help themselves when it comes to piling debt on our kids and grandkids. Democrats continue to add tens of billions of dollars to the deficit while promising to eventually end their unprecedented spending binge.”

Some supporters of the proposed changes have even indicated that there is no real need to offset the cost of ending the SGR. They argue that since Congress always overrides the SGR cuts to pay Medicare doctors (as it has 17 times previously), the SGR is fundamentally artificial, a “budget gimmick.”

However, not fully paying for an SGR fix would break with previous congressional practice. In fact, Congress almost always felt compelled to offset the temporary doc “fixes.” As the Committee for a Responsible Federal Budget shows, the annual offsets to the temporary SGR “fixes” have amounted to a total of $165 billion since 2003. While there is disagreement on the quality of those offsets, as Joe Antos, former CBO assistant director, has argued, they have been real. For taxpayers, a congressional retreat from offsetting the full cost of repealing the flawed SGR would be equally real: $130 billion in additional deficits.

As for the quality of the partial offsets being advanced, those policy details matter. Rumors abound that the SGR deal is pregnant with “serious” reforms to Medicare that will guarantee future savings well beyond the 10-year budget window. However, based on the press reports, the list of “reforms” are meager.

For serious reforms that incidentally result in serious savings, Congress doesn’t need to look too far. There is broad bipartisan support for reforms that would raise the age of eligibility and intensify competition within Medicare Advantage. Beyond that, Congress should quickly move Medicare into a defined contribution  (premium support) program. Congress needs to get it right, not just get it done. Experience is a great teacher. Giving into increases in federal spending or taxation on the basis of promises of future budget cuts or program savings is almost always unwise. In a failed 1982 budget deal with Democratic House Speaker Tip O’Neill, President Ronald Reagan accepted O’Neill’s promise that he would get $3 dollars in spending cuts for every $1 dollar in tax increases. Those government spending cuts never materialized.

Reagan had another  exquisitely relevant rule: “Trust, but verify.”  For members of Congress, exclusively charged with the awesome power of the purse, it’s not just a good idea; it’s their Constitutional duty.