Meet ‘Bougie’, The Man Who Might Unseat ‘Bibi’ as Israeli Prime Minister 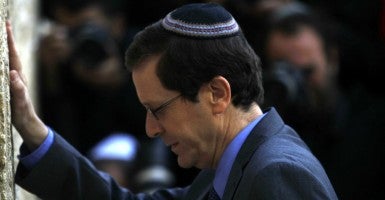 Isaac Herzog, co-leader of the Zionist Union party, prays at the Western Wall in Jerusalem March 15 before Israelis go to the polls in the general elections on Tuesday. (Muammar Awad/Newscom)

Israeli Prime Minister Benjamin Netanyahu is up for re-election Tuesday, and recent polls suggest that his path to victory will not be easy. In fact, “Bibi” might be replaced by “Bougie.”

In addition to serving in the Knesset—Israel’s parliament—Herzog has worked as chairman of the Israel Anti-Drug Authority, minister of housing and construction, minister of tourism, minister of the diaspora, society and the fight against anti-semitism, and the minister of welfare and social services.

Herzog comes from a politically powerful family whose members have served as chief rabbi of Israel, foreign minister, president, and head of Israel Defense Forces Intelligence.

According to Herzog’s biography, in 1975, while his father served as Israel’s ambassador to the United Nations, his family briefly moved to New York.

Herzog studied at both Cornell University and New York University before returning to Israel in 1978. He went on to study law at Tel Aviv University.

According to USA Today, Herzog is running on a platform promising to “pursue social and economic justice for Israelis and Palestinians.”

Unlike Netanyahu, Herzog supports a two-state solution to the conflict between Israel and Palestine. Under Herzog’s proposal, Jerusalem would remain Israel’s capital.

Herzog told The Atlantic that he opposes a nuclear Iran, but “I trust the Obama administration to get a good deal.”

Here’s what Herzog had to say to English-speaking voters in a video released by his party:

Alan Elsner, the vice president for communications at the left-leaning J Street, told The Daily Signal that if Herzog were to become prime minister, it would represent a “historic turning point” for Israel, and would usher in the sense of “a new generation rising.”

Elsner said that Netanyahu is “leading Israel into isolation,” while Herzog is interested in “social justice” and making sure Israel is “connected to the global economy.”

“[Herzog] has shown himself to be very level-headed and sensible,” Elsner said, adding that the notion that “Netanyahu is the only one who can protect Israel” is a “myth.”

Here’s what people are saying about Herzog on Twitter:

Buji Herzog, Bibi’s opponent, had this to say about Iran: “I trust the Obama Administration to get a good deal.” http://t.co/UNW3gJvxNQ

.@JeffreyGoldberg: “But you are known in Israel as, let’s say, a non-charismatic figure.” Herzog: “Thank you.” http://t.co/T1sZN93XiQ